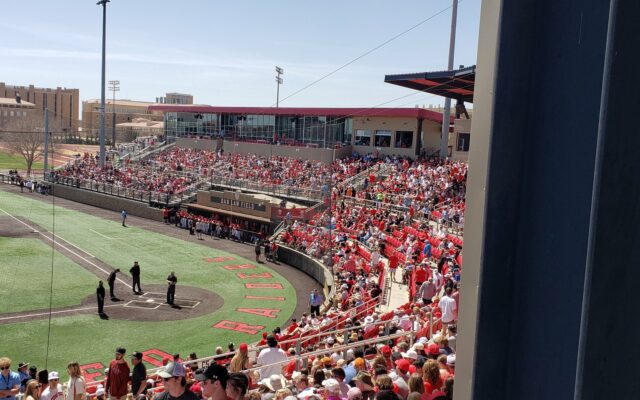 LUBBOCK, Texas – No. 7 Texas Tech raced away on Tuesday night with a 19-1 win against Stephen F. Austin at Rip Griffin Park. The Red Raiders scored six runs in the first two innings and six more in the fourth to take control of the game early, on an evening the West Texas wind was howling out to left field.

Texas Tech’s three and four hitters, Jace Jung and Ty Coleman, each produced five RBIs. Coleman left the yard twice while Jung mashed one home run of his own. In total, the Red Raiders registered a season-high five home runs as Easton Murrell and Kurt Wilson were among that group.

Jung had a career-high five hits, going 5-for-6 from the plate. Coleman went 4-for-5, while six others had two hits as eight different Tech batters had a multi-hit night en route to 23 team hits.

Wilson, who had a huge weekend against Texas, remained hot as he put Texas Tech in front in the first inning by hitting a three-run home run (watch). In the second, Jung hit the first of his three doubles on Tuesday to increase the lead to 4-1 (watch), and one batter later, Coleman knocked the first of his two home runs (watch) to make it a 6-1 game.

Andrew Devine made his first career start in place of Chase Hampton, and gave the Red Raiders four solid innings. He allowed a leadoff solo home run in the second but was unscathed outside of that. He allowed two hits, struck out five (watch), and walked one.

The game was put away in the fourth as the lead grew to 12-1. The first four batters in the inning produced multi-base hits, including two home runs, to quickly increase the Red Raiders’ lead to 10-1. Murrell led off with a solo homer (watch), Cole Stilwell and Jung followed with doubles, and Coleman connected for his second home run (watch) of the game.

The Red Raiders’ pitching staff of Devine, Colin Clark in innings five through seven, and Brandon Beckel for the last two, held Stephen F. Austin to three hits as a team. Clark allowed one hit, struck out three without a walk while Beckel kept SFA hitless and struck out four without a walk.

Texas Tech poured on seven more runs in the latter half of the game, tallying three in the seventh and four in the eighth.

Quotable
Head Coach Tim Tadlock
On the way the team pitched…
“Tonight was about as tough a set of conditions that you could possibly pitch in. I’m really proud of the way that all three guys threw the ball. [Andrew] Devine went out and set the tone. He pitched ahead in the count and commanded three pitches. He really picked us up today. Hampton wasn’t feeling well and we needed to fill those innings somewhere. He really picked our team up by being able to do that.”

On what he was hoping to see tonight…
“We were just trying to play good baseball in all phases of the game. Again, the conditions were tough. We tried to have good tough at-bats and for the most part, the guys did that.”

Sophomore Andrew Devine
On setting the tone early…
“I went into the game with the mindset of executing pitches, throwing strikes and keeping the ball down. With the wind blowing out we didn’t want to have any balls in the air. It was mainly about executing and sticking to the game plan that we set before the game. I know [Chase] Hampton got sick and got scratched, so I had to step in. I’m grateful for the opportunity to pitch today.”

On how he prepared…
“Tadlock always talks about being ready when your name is called. So, I wouldn’t say I was unprepared. I woke up this morning ready to play baseball. I found out I was getting the start around 11 a.m. this morning and I think I did a good job of preparing and getting my body ready to start tonight.”

Junior Ty Coleman
On batting behind Jace Jung…
“He’s sets everything up for us, and when he’s going it really gives all of us a boost. He’s a big catalyst for us and it’s fun to hit behind him because you’re always going to hit with runners on base which makes us more comfortable.”

Up Next
The Red Raiders finish their midweek series on Wednesday at 1 p.m. against Stephen F. Austin. Big 12 play resumes with a road series at Kansas this coming weekend.