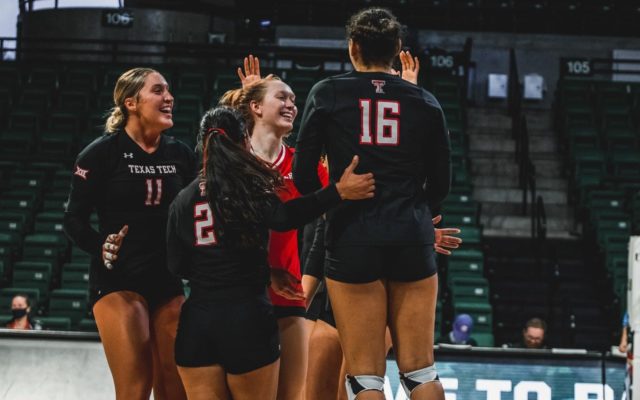 BIRMINGHAM, Ala. – Texas Tech volleyball opened the Green Wave Invitational with sweeps of UAB and Tulane Friday. The Red Raiders hit above .300 as a team in both matches, with a season-high .392 clip against UAB.

The Red Raiders came out of the gate swinging in the first set, hitting .516 as a team with 17 kills on the way to a 25-17 opening set win. Tied at 13, kills from Kenna Sauer and Brooke Kanas gave Tech a two-point lead which they would not surrender the rest of the set. The Red Raiders used a 9-1 run to create set point at 24-15. The Blazers fought off a couple of set points before a kill from Karrington Jones gave Tech the set.

UAB made the second set close, but Tech came away with the 26-24 win. The Red Raiders jumped ahead first, leading by as much as seven at 15-8 until the Blazers rallied to tie the set at 24. A couple of UAB attack errors handed Tech the second set, giving the Red Raiders a two-set advantage.

The Blazers set the pace to start the third set with a 3-0 run to lead by four until the Red Raiders responded with four straight points to tie the set at nine. A five-point Red Raider swing put Tech ahead 15-11. Tech pushed the lead to six with five straight points, forcing a UAB timeout up 20-14. The Blazers responded with a 4-1 run out of the timeout, but Tech tallied the next four points to win the set 25-18 and sweep the Blazers.

The Red Raiders set the tempo with a strong service game in the first set, tallying five aces in the frame. Tech used a 5-0 run to take a 14-9 advantage, sparked by back-to-back aces from Alex Kirby. Sauer tallied her second ace of the first set to get the Red Raiders to the 20-point mark, 20-15. Tulane used a late run to narrow the lead to a few points but kills from Cooper and Sauer secured the 25-20 opening set win.

The second set opened with a kill from KJ Adams. Tech continued to build on the lead forcing a Green Wave timeout at 8-3. Kirby’s third ace of the match put the Red Raiders up 13-6. Sauer matched Kirby with her third ace of the match to make it 20-11 in favor of Tech. The Red Raiders closed out the set on an 8-0 run, ending with an emphatic block from Reese Rhodes. Tech held Tulane to -.097 hitting in the second for a dominant 25-11 set win.

Both sides traded points to start the third set until a 6-1 run put the Red Raiders up by five, 16-11. Tulane cut the lead to a couple with a three-point swing, but Tech came roaring back taking six of the next seven points for a 22-15 advantage. The rally was capped off by Alex Torres’ third ace of the set. The Red Raiders finished off the Green Wave with back-to-back kills from Cooper for the second sweep of the day.

Tech tallied a season-high 11 service aces in the win. Sauer recorded a career-high four aces while Torres and Kirby each had three and Adams added one. Kirby finished with a double-double of 28 assists and 12 digs. Sauer and Cooper recorded nine kills apiece to lead the Red Raiders.

Texas Tech closes out the Green Wave Invitational and the non-conference schedule against Sam Houston Saturday at 11 a.m. in Birmingham.