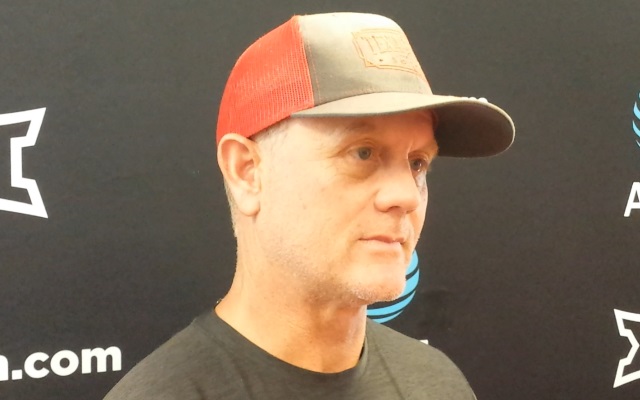 The Red Raiders received 72 total points, including six of the nine available first-place votes, as coaches may not vote for their own team. Oklahoma State, who edged out Tech by two points in last year’s dramatic regular season title race, collected 70 points and were picked to finish second. The two will be chased by TCU (55 points), West Virginia (54) and last season’s Big 12 Championship winners, Kansas (48).

“It’s an honor to be recognized by your peers,” said head coach Tom Stone. “We appreciate the respect, but what we’re focused on is losing the regular season title last year by two points, not a preseason poll. There’s a long way to go, and we know how vicious the Big 12 can be. We look forward to the challenge of living up to that expectation.”

While Stone and his team know very well nothing is decided in the preseason, they do know they have assembled a team poised to make a run at hardware. Tech is returning eight of 11 starters from last year’s team that tallied a program-best 20 points in the hunt for its first ever Big 12 regular season title. The group finished 15-4-3 and recorded a program-best six Big 12 wins. The success led the Red Raiders as high as No. 13 in the national polls before they rounded out the season No. 20 after making their seventh NCAA Tournament appearance in eight years.

“With good experiences comes a desire for more,” Stone said. “This group isn’t satisfied. As good as the team was, as fun as they were to watch and coach, we didn’t bring home any hardware. There’s a lot of unfinished business.”

Returning starters will include the likes of All-Americans Kirsten Davis and Cassie Hiatt, plus Big 12 Freshman of the Year goalkeeper Madison White. The trio were named Preseason All-Big 12 on Thursday.

Davis’ offensive help will be plenty as it will include Second Team All-Midwest midfielder Jordie Harr and Charlotte Teeter, whose 17 points in two years leads her signing class. The forward position will be stacked as the team’s leading goal scorers from 2016 and 2017 will return in the form of Jade King and Ally Griffin, respectively. Continuing to contribute will undoubtedly be TopDrawerSoccer.com Top-100 Freshman Macy Schultz, whose 2019 highlight was her overtime winner at Texas. Stone’s offense grew in numbers again this offseason with the addition of sophomore transfer Madison Drenowatz and freshman signee Gisselle Kozarski, both of whom are worthy of minutes in the Tech attack.

Standing in net, goalkeeper White will look out upon a back line seeking its third-straight season atop the conference in fewest goals allowed. Hiatt will lead the group along with All-Midwest center back Hannah Anderson, who was a unanimous addition to the Big 12 All-Freshman Team last fall. The two will be flanked by the likes of sixth-year captain Margaret Begley and seniors Amanda Porter and Macy Hairgrove. Also tasked with shutting down opposing forwards will be senior Luana Munoz and highly-touted freshman Briley Weatherford. Options continue to present themselves on the depth chart when you add redshirt sophomore Sierra Jones, whose overtime winner at Iowa State last season sealed career win number 150 for Stone.