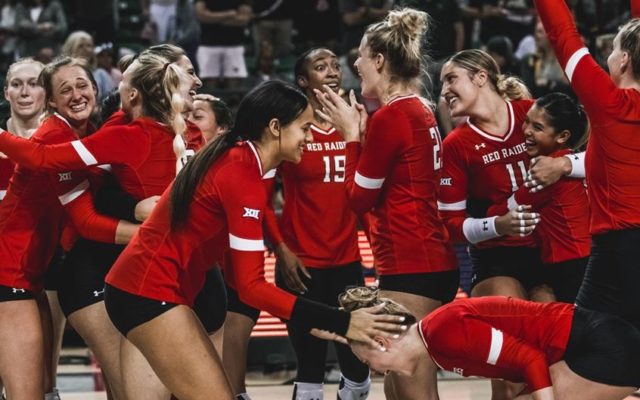 The win marks the first by the Red Raiders over a top-10 opponent since 1996.

Alex Kirby recorded her 2,000th career assist with 44 total in the contest. Kenna Sauer paced the Red Raiders with 19 kills and 17 digs, her ninth double-double of the season. Reagan Cooper added 14 kills and Karrington Jones finished with 11 kills. Maddie O’Brien provided a spark off the bench for the Red Raiders with six kills off .385 hitting and a couple of blocks.

The Bears took a 2-0 lead in the match with a 25-19 set two win. After a back-and-forth start to the set Baylor used a 7-2 run to lead 18-13 and force Tech to use a timeout. The Red Raiders pulled back within three out of the break, but the Bears were able to hold off a late rally to claim the second set.

The momentum began to shift in the third set when the Red Raiders battled back from a 10-6 deficit to close the gap to one point, down 11-10. Tech surged ahead with a 7-2 run, taking an 18-15 advantage and forcing Baylor to use a timeout. The Bears tied the match at 22 with a block before the Red Raiders rattled off the final three points to win the third set 25-22.

Tech carried the momentum over into the fourth set, with a 6-1 run to start the frame. The Red Raiders pushed the lead to 13-5 off three straight kills from Cooper. The Bears responded with a 6-1 run of their own, cutting Tech’s lead to three. Baylor pulled within a point after a three-point swing, but another kill from Cooper and a Baylor attack error pushed the lead back to three. A long rally ended in a set point for Tech with a kill by Sauer and Kirby ended the set with a kill, tying the match at two sets apiece.

The deciding set was a back-and-forth affair with 11 ties and six lead changes, before the Red Raiders strung together back-to-back points to win the match. Tech’s first match point came at 14-13 after a kill from O’Brien, but a service error tied it at 14. Next, it was Baylor’s turn for match point as Avery Skinner collected her 27th kill, but a service error on the Bears gave Tech another life. Another Baylor service error set up a second match point for Tech. The Red Raiders capitalized as Sauer slammed a ball over the net for Tech’s first win over a top-10 opponent in 25 years.

The Red Raiders tallied 61 kills of .206 hitting while the Bears recorded 71 kills and a .247 clip with 14 blocks. The Bears committed 27 attack errors and 14 service errors, which ended up being the difference in the match.