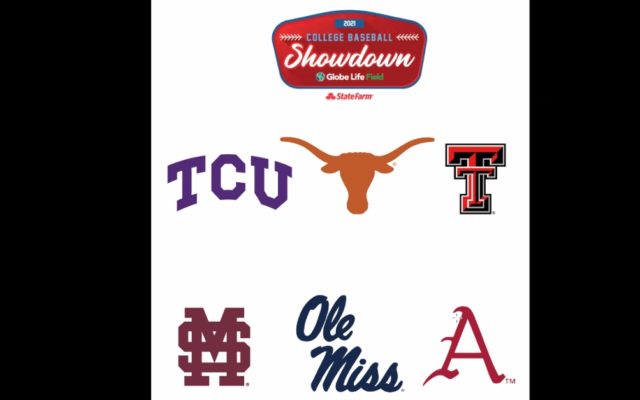 All eyes in the college baseball world will be fixed on Arlington where the Red Raiders will be among three Big 12 teams and three SEC teams in competition.

Tech opens the season in prime time Friday night with a 7 p.m. first pitch against No. 8 Arkansas. The weekend continues Saturday afternoon as Tech faces No. 6 Ole Miss at 3 p.m. The Red Raiders conclude their stay Sunday at 11 a.m. against No. 7 Mississippi State.

Tickets will go on sale this afternoon at 1 p.m., and can be found at Texasrangers.com/collegebaseballshowdown.

The entire event will be streamed by FloBaseball.com ($). As always, fans can listen to the games on the Texas Tech Sports Network.

This will be the first time Tech has seen Ole Miss since a 5-1 win at the 2017 Shriners Classic. Meanwhile, Tech has squared off with Arkansas three times dating back to 2018, including a thrilling 5-4 win in an elimination game at the 2019 College World Series. Finally, Mississippi State was the last team Tech faced in 2020 as the Bulldogs got the better of a two-game midweek series in Biloxi, Miss., just before the season was canceled.

The Red Raiders are no stranger to college baseball’s premier events. Tech took part in the Round Rock Classic with Tennessee, Stanford and Houston last season and competed in the Round Rock Classic the year prior, which featured Mississippi State, Nebraska and Sam Houston State. Tech has also been a regular at the Shriners College Classic in Houston with three appearances at Minute Maid under head coach Tim Tadlock.

The Red Raiders’ last trip to Arlington was in 2017 when they took on UT Arlington at Globe Life Park, the prior home of the Rangers for 25 years. Tech dropped a 5-1 decision to the Mavericks for their first midweek loss of the year.

Tech enters the 2021 season at No. 3 in multiple preseason polls after finishing the shortened 2020 season with a 16-3 record and a No. 4 final ranking.

For more info on the event, visit Texasrangers.com/collegebaseballshowdown.