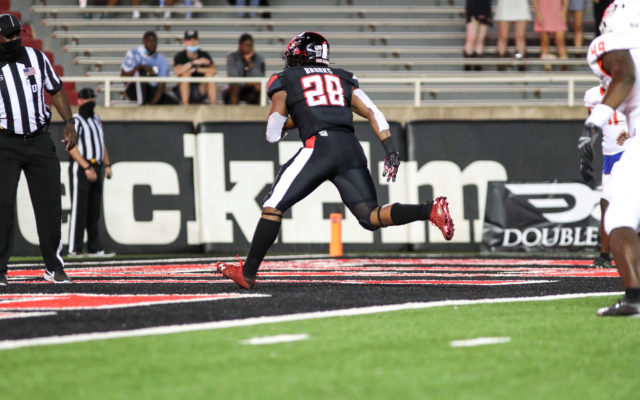 ESPN2 will broadcast the Red Raiders and Mountaineers on Oct. 24 inside Jones AT&T Stadium

LUBBOCK, Texas – The Big 12 Conference announced Monday a 4:30 p.m. kickoff for the Oct. 24 matchup between Texas Tech and West Virginia at Jones AT&T Stadium. Coverage will be provided nationally on ESPN2 and the Texas Tech Sports Network.

This will be the third-straight afternoon kickoff for the Red Raiders, who will be looking to snap a three-game losing skid against the Mountaineers. Tech (1-3; 0-3) is off this weekend, while West Virginia (2-1; 1-1) will host Kansas in Morgantown.

The Red Raiders throttled West Virginia in Morgantown a year ago with a 38-17 victory that was Tech’s first over the Mountaineers since 2013. Tech jumped on West Virginia early in that win, scoring 21 points in the first quarter alone en route to a 35-10 lead at halftime. The Red Raiders easily won the turnover battle after securing two interceptions and recovering two fumbles while giving away none of their own.

West Virginia opens a two-game homestand for the Red Raiders as Tech will host Oklahoma the following Saturday inside Jones AT&T Stadium. Game time and television designation for the Oct. 31 contest could potentially be announced as early as next Monday.