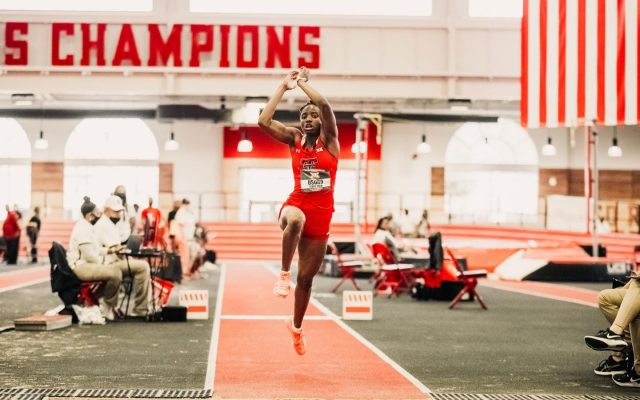 Lexye Price recorded a big personal best in the 400m hurdles. Price clocked 59.98 for her first sub-one minute time of her career in the event. The time came out to beat her previous best by two seconds. It was plenty for the win in the event.

Peyton Ricks continued her career year with a win in the 200m for the women. Ricks, who seemed to pile on the PRs throughout her indoor campaign, opened her outdoor season with a 23.97. It comes out to be the second-best wind legal 200m time of her career and matched the time she posted at the Big 12 Outdoor Championships in 2019.

One of the top highlights of the day was Sara Limp, who dusted the field with a 53.89. While not a blistering time for the fifth-year senior, Saturday marked Limp’s first outdoor race since 2018, where she was an All-American on the Tech 4×400 relay. Limp injured her hamstring at the 2019 Big 12 Indoor Championships, putting her out for the ensuing outdoor campaign. She competed unattached twice indoors in 2020 and once in 2021 before making her much-anticipated return Saturday.

Chancellor Stephenson PR’d in the 400m with an impressive 46.68. Stephenson, who ran the quarter-mile leg on the All-American distance medley relay at the NCAA Indoor Championships.

The hurdles saw more strong times from the Scarlet & Black. Maliek Kendall, a two-time Big 12 runner-up in the 60m hurdles, ran his first 110m hurdles race as a Red Raider in 14.09 – a new career best. It was his best time since running 14.19 for Texas Southern in 2017.

Gabrielle McDonald led the way in the women’s hurdles, just missing a PR by one one-hundredth of a second. The former Big 12 Champion in the 60m hurdles clocked 13.17. McDonald was followed by teammate Demisha Roswell, who timed 13.40 in what was also her Tech outdoor debut.

Wrapping up track events were the 4×400 relays. The women’s foursome of Kiara Lester, Sara Limp, Joanna Archer and Jadsia Warden clocked 3:38.99. Saturday marked Warden’s first meet in a year after rounding out her indoor eligibility in 2020. The men, whose squad included Keion Sutton, Ashton O’Conner, Terrance Jones Jr. and Josiah Macinnis, timed 3:11.63 for their win. Jones Jr. was making his Texas Tech debut.

The men were stronger in the short relay. A foursome of Sutton, Karayme Bartley, O’Conner and Justin Hall timed a winning 39.84, making Tech the first 4×100 squad to dip below 40 seconds this season. The women’s 4×1 – consisting of D’Jenne Egharevba, Daja Gordon, Le-Taija Jackson and Simone Watkins – clocked 47.00 to finish third.

Jequan Hogan and Chinne Okoronkwo led Tech to a sweep in the triple jump. Hogan opened his campaign with the second-best outdoor triple mark of his career, landing 52’-4.75” (15.97m) for the win. He was followed by Okoronkwo, who later in the day marked 41’-10.5” (12.76m) for the victory.

Pole vault was another event that resulted in a sweep for Tech. Chloe Wall began the day by winning the women’s end. She cleared 13’-1.5” (14.00m). She was followed by freshman Sarah Tackitt, who cleared the same height but was behind Wall in the standings on misses.

Next on the docket for the Red Raiders will be the Texas Relays, taking place March 24-27 in Austin.