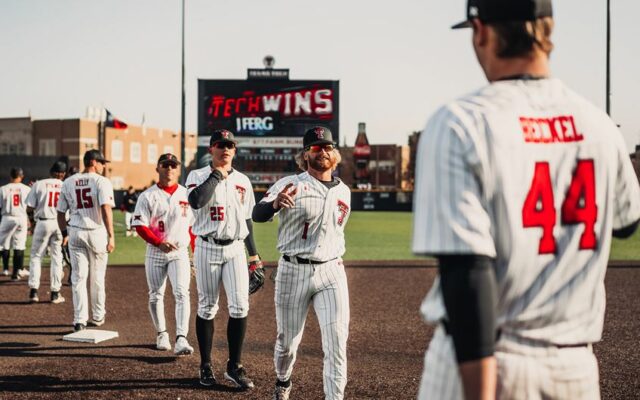 LUBBOCK, Texas – The No. 19 Texas Tech baseball team defeated Merrimack College, 12-4, on Sunday afternoon at Rip Griffin Park. The win completed a four-game sweep for the Red Raiders, outscoring the visitors from the Boston area 70-12 over the last three days.

Tech improves to 10-2 in 2022, are winners of eight-straight games, and will now look ahead to facing the 2021 National Champions, Mississippi State. A two-game series that will play out on Tuesday and Wednesday at MGM Park, home of the Double-A Biloxi Shuckers.

On Sunday, Austin Becker made his first start since the 2020 season, after rehabbing from injury. He earned the win, tossing three scoreless innings while allowing one hit. He struck out five of the 11 batters he faced and did not issue a walk. A collection of five different arms backed up Becker on a bullpen Sunday.

Jace Jung led the offensive effort as he has the entire series. In the finale, he went 3-of-5, and was one hit shy of the cycle as he was credited with a single, double and a triple. For the series, he led all Red Raiders with a .611 batting average (in four games), amassing 11 hits and six RBI.

Along with Jung, Owen Washburn collected three hits, one of which was a three-run home run in the fifth that broke the game open (watch). Entering the bottom of the fifth, Tech held a narrow 3-2 lead, but as they have all weekend, the bats erupted for a big scoring inning. Texas Tech scored seven runs on seven hits and left the frame with a commanding 10-2 lead. Each squad scored a pair in the seventh as Tech cruised to its series sweep.

“I was really proud of Austin. For his first start coming off of everything he’s been through, I thought he commanded two pitches really good. I thought he showed a third pitch. I thought the fastball was really good, thought it had good late life to it, and his breaking ball has always been good.”

On the team coming together…

“Those guys have all meshed really well. They all get along really good. They have a lot of fun, a good bunch of guys. The neatest thing is they all know there’s more there for them and they’ve been working at it pretty hard.”

On what worked today…

“My fastball was good earlier on, I think I yanked a couple of them. It’s something I’ve been working on religiously really. Breaking ball has been good. Change up’s have been my go-to pitch, but it wasn’t really working today so I had to get my curveball for a strike and I did.

On his approach at the plate in Year No. 3…

“This year [pitchers are] being really picky. They’re trying to just get corners on me. Obviously, I step in the box and they know who’s in there. They know not to leave one up the middle. Having the ability to just take my singles, take my doubles, not everything has to be a home run.”

On the next challenge…

“Come Tuesday, or Monday when we get [to Mississippi], there’s going to be a whole different opportunity. [Mississippi State is] a top 25 team. The last time we played there, it was full Mississippi State. Going in there, knowing the crowd, knowing the atmosphere you’re going to get, and staying within ourselves will really help us.”

Up Next
Texas Tech travels to Biloxi, Miss. for two neutral site games versus Mississippi State on Tuesday and Wednesday, and remains on the road to face Rice next weekend. The Red Raiders’ next home game is March 15 (Tuesday) with New Mexico coming to town.