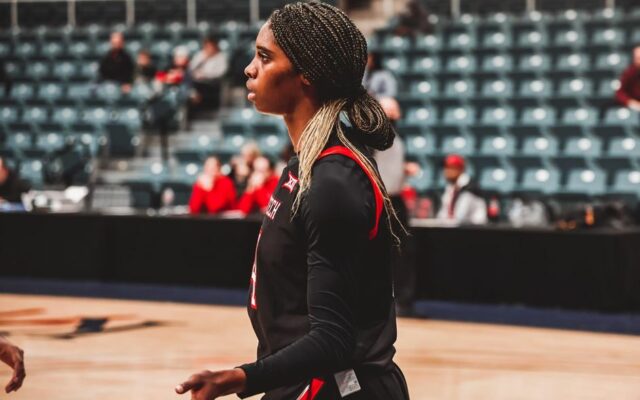 Never was that culture more on full display than in Friday night’s 71-67 victory over the Ball State Cardinals Friday afternoon at the Merrell Center.

In the victory, the Lady Raiders (5-0) trailed by five points in the fourth twice, but a career-high 18 points and 17 rebounds from senior Taylah Thomas and 15 clutch points from West Texas transfer

Lexi Hightower proved to be the difference. Five of Thomas’ 17 boards came on the offensive end of the floor, while Hightower scored nine of her 15 in the final period of play.

Led by two points apiece from Thomas, Hightower and freshman Rhyle McKinney, the Lady Raiders took an early 6-0 lead over Ball State (2-1) in the opening quarter of play.

The Cardinals would respond, however, using a 6-0 run to tie the game at six at the under-five media (4:42) timeout of the first period.

Powered by the three-ball, Ball State used a 14-2 outburst over the next five minutes and 14 seconds to cut the Tech lead to 28-23 with 3:32 left in the second.

One last Thomas layup capped a brief 7-3 spurt that gave the Lady Raiders a 35-26 lead at the break.

Following the halftime break, Ball State started fast, scoring 12 of the first 16 to cut the Tech lead to just 39-38 with 6:47 to play in the third. The 12-4 outburst prompted a timeout from head coach Krista Gerlich.

The run reached as high as 15-4 at the 5:59 mark when Sydney Freeman nailed a three to give the Cardinals a 41-39 lead, their first of the contest.

The Ball State lead sat as high as 50-47 with 26 ticks left in the third before a McKinney free throw cut the BSU lead to 50-48 at the quarter break.

One more Freeman triple gave Ball State a game-high 53-48 lead at the 8:05 mark of the fourth.

After a jumper from Ball State put them back on top (60-58) at the 2:44 mark, Lexy Hightower used a pair of free throws and a clutch triple to give the Lady Raiders a 65-60 advantage with 35 ticks left.

Down the stretch, Ball State twice cut the Tech lead to just one possession, but a make from the line by Thomas and a pair from Hightower gave Tech a 70-67 lead with nine seconds left.

Needing a three to tie, Ball State and Freeman launched from behind the arc, but Thomas grabbed the rebound and hit one last free throw to power the Lady Raiders to the 71-67 victory.

“Our kids showed a lot of guts and fortitude, and they decided to win at the end of the game. The fourth quarter we played really hard. We tried to lock down on the defensive end, but Ball State can really shoot the three. Taylah’s performance was exactly what a senior should do, especially when adversity hits. She rose up and played well, and I’m really proud of her gutsy performance. The one bad thing for her is that she’s beating herself up over the way she shot it from the line, but she played a great game. And then Lexy did a great job of playing in big moments, which is what Lexy is really good at. She played in a lot of big games at West Texas and you saw her ability to play in those moments tonight when she hit the big three and showed a lot of poise at the free-throw line. You can’t overlook the fact that Saga [Ukkonen] came in after not playing a lot and hit a big three in the fourth.”

On the zone defense in the fourth quarter:
“We decided we needed to do something to try and slow down their 3-point shooting. They got really hot at the 3-point line, but we finally went small down the stretch which helped us defensively. It allowed us to defend their drive better. We tried to mix it up as much as we could in the second half because we couldn’t get them to stop hitting the 3-point shot.”

“I knew that we just needed to stay together as a team tonight and that it would be a team win and effort. Our ability to do that was the deciding factor in the game. We had a couple of clutch plays by a few different people. Rhyle tied the game with some free throws, Taylah had a million rebounds it felt like and Saga hit a huge three. We just needed to come together as a team. It’s a game-by-game process. Everyone is learning how to play together and tendencies. We’ll get Vivian [Gray] and Bre’Amber [Scott] back here soon and really put it all together. It’s a game-by-game process.”

“At the end of third, we were told that we needed to stay disciplined and get down and guard them. We needed to do a better job of rebounding and shutting down their 3-pointers. That was a struggle for us for a lot of the game. So we tried to make sure they didn’t get a lot of threes off in the fourth. We also needed to do a better job of rebounding on the defensive end. They did a good job of moving around and not staying in one place. We were out of position at times which did not put us in a great position to rebound. This year we probably haven’t played a team like them. We did a good job of digging deep and staying together to get the win.”

• Thomas’ 17 rebounds are a season-high. Thomas’ career-high in rebounds is 21.
• The Lady Raiders allowed a season-high 16 offensive rebounds.
• Overall, Tech still won the rebounding margin 41-36.
• Thomas was an efficient 7-for-8 from the floor.
• Tech shot 28-for-54 (51.9 percent).
• The Lady Raiders outscored Ball State 42-20 in the paint Friday.
• McKinney scored 11 points and had a career-high six assists.
• She now has scored in double-figures in all five games, and has nine assists the last two games.
• Ukkonen’s six points were also a career-high.

The Lady Raiders continue play in the Van Chancellor Classic Saturday afternoon for a 1:30 p.m. matchup with Old Dominion.