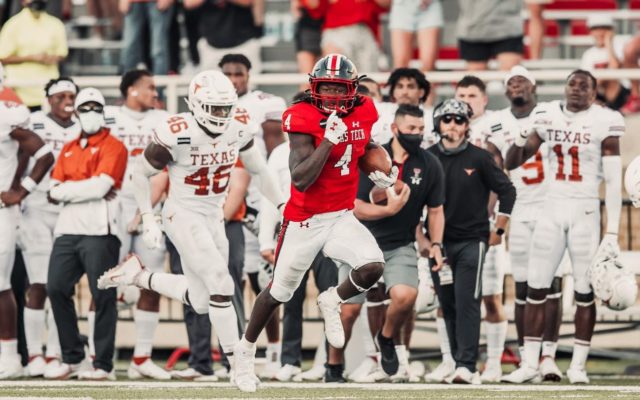 LUBBOCK, Texas – Texas Tech junior running back SaRodorick Thompson saw his name placed on the preseason watch list for the Doak Walker Award for a second-consecutive year Tuesday as part of an announcement by the PwC SMU Athletic Forum.

This is the first preseason watch list for Thompson this season and the third of his career as he was also a preseason candidate for the Earl Campbell Tyler Rose Award prior to the 2020 campaign. The Doak Walker Award, presented annually to the nation’s top running back, is only the fourth watch list announced thus far as part of the schedule from the National College Football Awards Association (NCFAA).

Thompson has paced Texas Tech on the ground the past two seasons, becoming the first Red Raider to lead the team in rushing over back-to-back years since DeAndre Washington in 2014-15 and the first underclassman to do so since Taurean Henderson was the team leader over four-straight seasons from 2002-05.

Two of those names are familiar ones in the history of the Doak Walker Award as Morris became the first Red Raider to claim the prestigious award in 1993 followed by Hanspard in 1996. Texas Tech joins the likes of Texas, Wisconsin, Stanford and Alabama as the only schools nationally with multiple winners of the award since its inception in 1990.

Thompson has rushed for 1,480 yards and 23 touchdowns over his two-plus seasons, placing the Irving native in contention to join the school’s all-time career leaders entering the 2021 campaign. He needs 800 rushing yards to match Ring of Honor member Donny Anderson (1963-65) for 10th all-time in program history and six touchdowns on the ground to tie the trio of Billy Taylor (1974-77), Hanspard (1994-96) and Zebbie Lethridge for eighth in the school record book.

The Doak Walker Award will name 10 semifinalists in November followed by three finalists after a vote by its national selection committee later in the month. The committee will cast a second vote in December to determine the 2021 recipient of the award, which will be announced live on ESPN during The Home Depot College Football Awards.

The award is named for SMU’s three-time All-American running back Doak Walker. It is the only major collegiate award that requires all candidates to be in good academic standing and on schedule to graduate within one year of other students of the same classification.