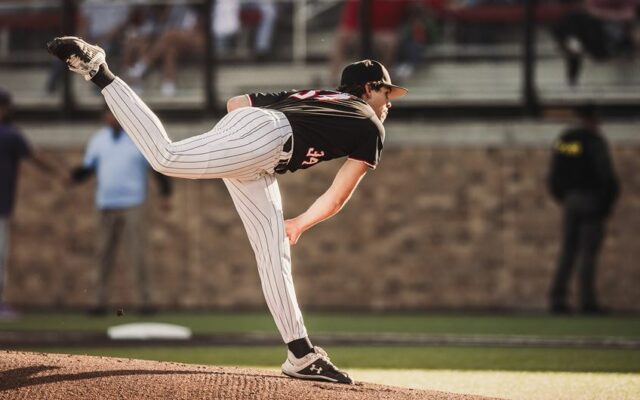 STATESBORO, Ga. – Friday for No. 24 Texas Tech started at 2:02 p.m. and ended in heartbreak at 11:32 p.m. against No. 17 Notre Dame to cap day one of the Statesboro Regional. Under the night sky, the Red Raiders fell 3-2 in the afternoon regional that included a five-hour, 59-minute weather delay at J.I. Clements Stadium.Trailing 3-2 in the top of the ninth, Red Raiders’ pinch-runner Cooper Swanson was stranded on third base as Owen Washburn was struck out looking to end a wild Friday in Georgia. The previous inning, the eighth, featured the only three runs either team scored in the second half of Friday’s affair as Tech tied the game in the top half (watch) and Notre Dame regained the lead in the home half.

Earlier in the day, the Irish scored the game’s first two runs in the bottom of the first knocking a bloop double, fair by a foot from the right-field line, to bring home two with the bases loaded. After the second run crossed home plate, action was suspended due to lighting and approaching storms. It was 2:31 p.m.

Both teams returned to the field for an announced 5:35 p.m. restart, but more weather approached and both teams were sent back to their respective waiting areas.

The game resumed in the bottom of the first at 8:30 p.m. with Irish runners on second and third base and one out. Tech’s Friday starter Andrew Morris was shut down as the Red Raiders went to Derek Bridges when play resumed. The lefty worked masterfully, earning back-to-back strikeouts to avoid any damage with the inherited baserunners.
Much of the same ensued, for both sides, as hits were at a premium and strikeouts were in the bunches. Tech pitching produced 15 strikeouts while the Notre Dame staff registered 19. The 2-0 lead built by the Irish in the first inning held firm until the eighth inning when Easton Murrell slapped a two-out single up the middle to tie the game, 2-2, scoring Washburn and Parker Kelly. Washburn drew a walk and Kelly was hit by a pitch.
Tech’s Chase Hampton took over on the mound to begin the second and pitched six innings and struck out a career-high 12 batters. He retired the side in order in the seventh (watch) and returned to pitch the eighth but was lifted after the first batter reached on a catcher’s interference call with a 0-2 count to give Notre Dame a baserunner.

The Irish manufactured the game-winning run with the catcher’s interference call, as the baserunner reached second base using a sacrifice bunt, then stole third base and came across to score using a Mason Molina wild pitch a half-inning after Tech tied the game. Molina finished the inning without allowing a hit.

The 19 strikeouts by the Tech offense were a season-high and the most since 19 strikeouts on Feb. 19, 2020, at Florida State. Kurt Wilson struck out a career-high four times while three others went down three times.

Ty Coleman led the Red Raiders from the plate going 2-for-3 and owned a .800 on-base percentage by also drawing a walk and a hit-by-pitch. Tech was able to produce seven hits, but went 1-for-12 with runners in scoring position and left 13 on base. Tech put runners in scoring position in every inning but the third and the sixth, and loaded them in both the first and the fourth.

Quotable
Head Coach Tim Tadlock
Opening statement…
“I thought both teams were put in a really tough situation with the lightning delay early on. I thought it actually benefited us; there’s no way we go to the bullpen in the middle of the first inning. I thought Chase Hampton did exactly what we needed to do. Derek Bridges did exactly what we needed to do to get us out of the first; five hours later. But I thought it was a very tough situation for everybody that was involved. It’s not tough sitting around waiting; it’s tough though coming back and facing that type of pitching for anybody for both teams. I think you saw it on both sides; some maybe not as good at-bats as you’d see if you’re in the flow of the game. Again, not taking anything away from Notre Dame, at all, their guys threw great. I mean to come out of a six-hour rain delay and think the kid’s name was Simon, up to 97. Under the lights, none of us have hit under these lights. So there are a lot of elements there. You hadn’t seen a ball moving in six hours, you’ve been eating sandwiches, taking naps, playing games and all of a sudden you’re seeing 97 under lights that you haven’t hit under. It’s just a little bit different deal. I thought both teams handled it really good, their team actually handled it better.”