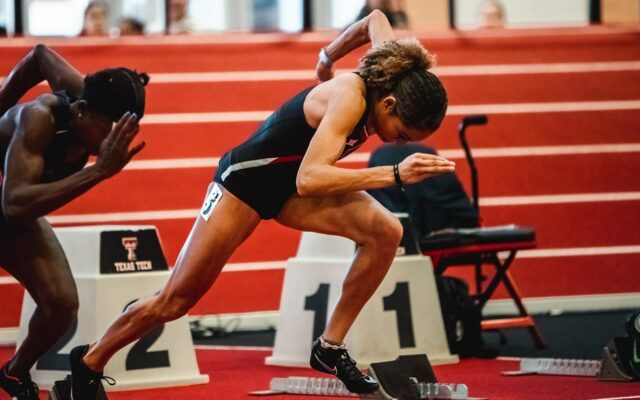 LUBBOCK, Texas – Texas Tech’s second meet of the indoor season saw the fall of two more school records, one each on the jumps runway and throws area.

Director of Track & Field/Cross Country Wes Kittley expressed excitement at the strong state of his program just two weeks into the season.

“It’s encouraging, I’ll tell you that, if we can do that in our second meet,” Kittley said. “We saw some great things today.”

Ruth Usoro led the way in creating excitement, breaking the school record in her first time triple jumping as a Red Raider. She landed a jump of 44’-2.5” (13.47m) in her second attempt, then tacked on three-quarters of an inch in her final attempt with a final mark of 44’-3.25” (13.49m) to secure the school record. The junior transfer, who was an NJCAA national champion at South Plains, now finds herself the top tripler in the nation and ninth-ranked jumper in the world.

“I knew I was capable of the school record,” Usoro said. “I was going to go for it no matter what, but I was surprised it came this early in the season.”

“To hold a school record at a program like Texas Tech is an honor,” Oladipo said after the meet. “I know I’m capable of even more, but it feels great to get the record.”

Elsewhere in the field, Brandon Bray vaulted 18’-1.75” (5.53m) to win the event and secure the fourth-highest mark in school history. The height, an indoor best for the redshirt senior, is his third program top-10 mark in the vault.

On the track, Jacolby Shelton ran an exciting 6.62 for the best time of his college career. He did so after running 6.66 in the preliminary – also a PR at the time. Even when converted to 6.64 for altitude, it is the best time in the Big 12 so far this season.

The men also picked up three more wins in the middle distance races. Takieddine Hedeilli won the 800m with a 1:49.57 in his season debut. After matching his PR from last year in the 600-yard run, Sven Cepus caught it by half a second with a 1:10.28 Friday. The mile was also won by Tech, with freshman Trent Nolen running a 4:19.76 for his first collegiate win.

On the women’s side, Gabrielle McDonald PR’d in the 60m with a 7.49 to win her first round heat. The junior, who last week was responsible for the first broken record of the season in the 60m hurdles, opted not to run the final.

The Red Raiders are set to host the nation’s premier meet next weekend, welcoming several other powerhouse programs to the Sports Performance Center. The meet, dubbed the Texas Tech Invitational, will begin Thursday with combined events. The rest of the competition will be held Friday and Saturday.