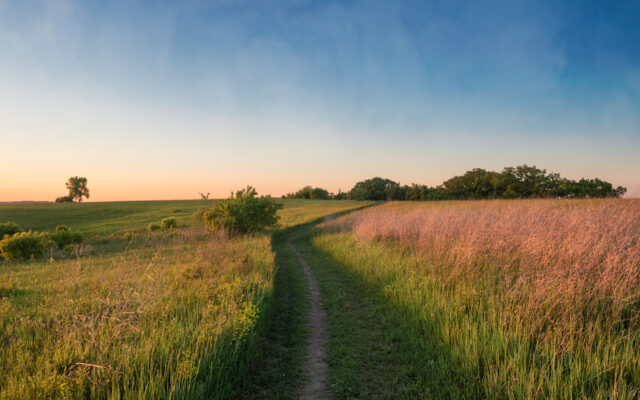 The sun sets at the end of a path through the grasslands of Sioux Falls, South Dakota, USA.

“The lesser prairie-chicken’s decline is a sign our native grasslands and prairies are in peril. These habitats support a diversity of wildlife and are valued for water quality, climate resilience, grazing, hunting and recreation,” said the Service’s Southwest Regional Director Amy Lueders. “The Service continues to work with stakeholders to develop voluntary conservation agreements that will protect the lesser prairie-chicken and the native grasslands on which it depends while assuring that oil and gas and renewable energy development, ranching, agriculture and other activities continue.”

The lesser prairie-chicken serves as an indicator for healthy grasslands and prairies – needing large, unfragmented parcels of intact native grasslands to maintain self-sustaining populations. This makes them an important measure of the overall health of America’s grasslands, a treasured and storied landscape.

While historical estimates suggest lesser prairie-chickens once numbered in the hundreds of thousands, or even millions, across nearly 100 million acres, populations have declined drastically due to habitat loss and fragmentation. Lesser prairie-chicken habitat has diminished across its historical range by about 90 percent. Aerial survey results from 2012 through 2022 estimate a five-year average lesser prairie-chicken population of 32,210 across the five-state region. Their decline reflects the larger decline in the vitality and resilience in shinnery oak, sand sagebrush and mixed- and short-grass prairie ecosystems.

For more than two decades, the Service and its partners have been working together to conserve this iconic species and its habitat. Together we have developed a suite of conservation tools and plans, including Candidate Conservation Agreements with Assurances (CCAA) and Habitat Conservation Plans (HCP), across the lesser-prairie-chicken’s five-state range to protect the species and provide certainty for industry and landowners.

To date, millions of acres have been enrolled in these plans. For example, since 2010 the Natural Resources Conservation Service has worked with nearly 900 landowners to implement conservation actions on approximately 1.6 million acres through the Lesser Prairie-Chicken Initiative, and landowners currently have enrolled more than 1.8 million acres across the range of the lesser prairie-chicken in the Conservation Reserve Program administered by Farm Services Agency. Ranchers have been leaders in voluntary conservation of the lesser prairie-chicken, having enrolled approximately 3 million acres of land in Candidate Conservation Agreements with Assurances (CCAA) in Oklahoma, New Mexico, and Texas.

Recognizing the importance of proper grazing management, as part of the 4(d) rule for the Northern DPS, the Service has crafted an exception for those producers who are following a prescribed grazing plan developed by a qualified party that has been approved by the Service. Additionally, the Service has worked with the Natural Resources Conservation Service to ensure that landowners receiving technical and financial assistance to implement land management efforts under the Working Lands for Wildlife Framework receive ESA predictability.

A thorough review of past, present, and future threats to the lesser prairie-chicken, as well as an analysis of ongoing conservation efforts, finds the Southern DPS is in danger of extinction, and the Northern DPS is likely to become endangered in the foreseeable future. The Southern DPS (see map) encompasses lesser prairie-chicken populations in eastern New Mexico and across the southwest Texas Panhandle. Habitat in this DPS is comprised largely of shinnery oak prairie. The Northern DPS encompasses lesser prairie-chicken populations in southeastern Colorado, southcentral to western Kansas, western Oklahoma and the northeast Texas Panhandle. Habitat in this DPS includes short-grass, mixed-grass and sand sagebrush ecoregions.

The 4(d) rule for the Northern DPS provides that farmers can continue their routine agriculture activities on existing cultivated lands. In addition, it recognizes the importance of proper grazing management and includes an exception for those producers who are following a prescribed grazing plan developed by a qualified party that has been approved by the FWS. Lastly, the 4(d) rule also provides an exception for implementation of prescribed burning for grassland management.

The Service’s peer-reviewed Species Status Assessment (SSA) evaluates the lesser prairie chicken’s current condition, provides a biological risk assessment, and incorporates the effects of both the threats and conservation efforts impacting the species. It also examines its biological status under varying plausible future conditions, incorporating the implications of future threats and conservation actions. As summarized in the SSA, habitat loss and fragmentation are expected to continue, resulting in continued declines across the species’ range even when accounting for ongoing and future conservation efforts.

As part of the SSA analysis, the Service estimated that of the approximately 21-million-acre analysis area, about 4 million (or 18%) of those acres are potentially lesser prairie-chicken habitat. Therefore, the Service expects minimal impact on development across large portions of the range due to the ability to avoid and minimize impacts to the species when industry considers lesser prairie-chickens early in their planning process as part of their project siting decisions.

“We have worked to ensure there are extensive options available for streamlined ESA compliance for all industries across the entire estimated occupied range of the lesser prairie-chicken,” said Lueders. “Moving forward, we welcome the opportunity to work with any other interested parties to develop additional options to fit their needs while providing regulatory certainty.”

The Service has determined that the designation of critical habitat for the lesser prairie-chicken is prudent but not determinable at this time. We will work with states and other partners to acquire the complex information needed to make a critical habitat determination.

The final rule to list the two Distinct Population Segments of the lesser prairie-chicken and the final 4(d) rule will publish in the Federal Register on November 25th and will become effective 60 days after publication. The final rule and supporting information are available online at http://www.regulations.gov under Docket # FWS-R2-ES-2021-0015.