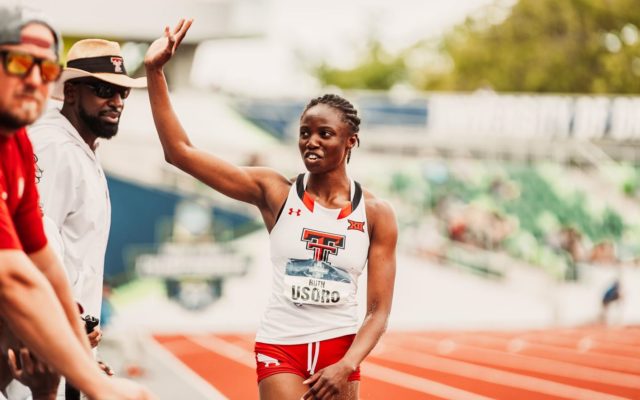 EUGENE, Ore. – Ruth Usoro completed her sweep of the NCAA indoor and outdoor championships in the triple jump while Seasons Usual became the first female discus medalist for Texas Tech in over a decade.

“It was a fun day today,” said Director of Track & Field and Cross Country Wes Kittley. “It was good to get a national champion in Ruth, who’s now a two-time national champion this year. It was great to see Seasons have a good meet for herself. Our women’s team was 11th indoors and now 11th outdoors, and I’m really proud of them. This is a really special group.”

In her first full year competing at Texas Tech, Usoro completed the indoor/outdoor sweep of the NCAA triple jump, just as she did at the Big 12 level. Usoro’s winning jump came in at 46’-6.75” (14.19m). Usoro’s indoor title was the first triple jump championship in any environment ever won by a Red Raider and second overall including Bryce Lamb’s title in 2013 indoor. This outdoor championship is the first outdoor triple jump title by any Red Raider in school history.

From her very first meet in January, the Corky Classic, where she took the world lead in the triple jump on her first attempt of the year, to June, where she would complete her sweep of the NCAA titles in the event, Usoro was undefeated in the triple jump. Big meet or small, title on the line or not, Usoro went a perfect 12-0 in triple jump competitions this year.

“Before we got to the track, we worked on my technique,” Usoro said. “When I went for that jump and saw 14.19 meters, I was excited because I have not jumped 14 meters since Big 12. To do 14.19 with the crowd cheering and my coaches and teammates screaming my name – it was an incredible moment.”

“Ruth’s got to be right up there in terms of the best we’ve ever had, especially in her event,” said Kittley. “The thing that makes her stand apart is that, when it’s show time, she knows how to compete. I don’t think I’ve ever seen her more on her mark than today. Every mark wasn’t fantastic, but she was so consistent and in her rhythm.”

After a tough-to-swallow ninth-place finish in 2019, Seasons Usual became the second woman in program history to earn First Team All-America honors in the discus. Usual was not just top-eight, but top-three, earning bronze. Her top throw came in at 192’-2” (58.58m) – her second-best mark of the season and third-best of her entire career. She is the first Tech woman to medal at nationals since D’Andra Carter won the title in 2009.

“I’m really excited about tonight,” said Usual. “Of course everybody wants first, but coming from ninth [place] at my first nationals to third at my second gives me so much motivation for the next time I go. I know I have that big throw that I’m going for, but for now I’m really excited to go from ninth to third and come back to get on the podium this year.’

She continued: “I was contending with some big girls. The two ahead of me … one is the world leader and the other was the returning national champion. These girls are unbelievable.”

Kaylee Hinton and Callie Jones wrapped heptathlon competition, making history as the first pair of Red Raiders to compete in the seven-event effort at the same nationals meet in school history. Hinton finished in 14th with 5,498 points. Jones would come in 19th with 5,270. Hinton’s top event of the day was the 800m, which resulted in a 2:19.08 for 836 points. Jones’ day-high 785 points came from her top event, the javelin.

Saturday’s action concludes the 2021 collegiate season for Texas Tech. For some current and former Red Raiders, though, the season will bleed right into a busy summer that includes Olympic trials for their home countries as well as the Tokyo Olympics. To date, Usoro (Nigeria), has already met the Olympic standard in both the long and triple jump, while former Red Raiders and NCAA champions Divine Oduduru (Nigeria, 100m and 200m) and Trey Culver (USA, high jump) have hit the standards as well. U.S.-born athletes must compete at the USATF Olympic Trials and place top-three to make the team.