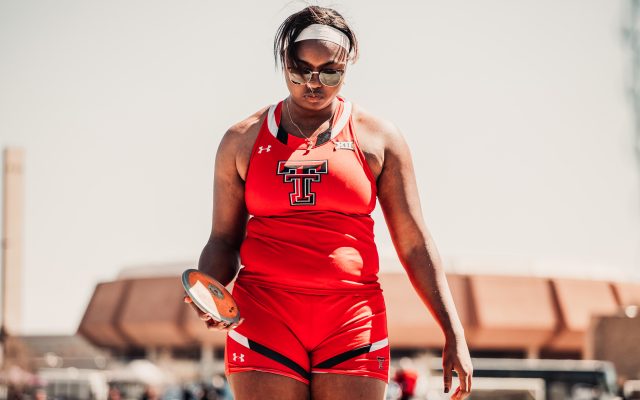 Seasons Usual’s first discus throw on her home practice field went flying. She landed her mark at 195’-10” (59.70m) from the circle, plenty for a career best. The distance counted as the second farthest in program history for the All-American, and the second farthest in the NCAA this season. Usual is one of just two to have recorded a mark over 59 meters so far this year.

“I knew I had a PR coming based off my practices this week,” Usual said. “I just had an off weekend and it allowed me to focus coming into this week. I still wanted further, but I will take today. I know a big one will come in due time so I’m just thankful for today and can’t wait for more.”

A week removed from his first discus PR as a Red Raider, Gabe Oladipo threw 188’-10” (57.56m). It is the second time Oladipo, who currently ranks fifth in the NCAA, has gone over 57 meters in his career.

In Arizona, Callie Jones continued her string of personal bests. She began the second day of competition with her third PR of the weekend – a 19’-7” (5.97m) long jump. It was the second time she had ever cleared 19 feet in the long jump and first time outdoors.

Jones would go on to finish second in the heptathlon with 5,577 points – of course, a new personal best.

Fynn Zenker led Tech in the decathlon. He finished with 7,134 points on the weekend, thanks to a strong second day in his first collegiate decathlon. His 50.11 400m earned him 810 points. Zenker scored another 703 in the hurdles, then cemented his third-place finish with a personal meet-high 941 points in the pole vault.

Saturday’s action in Lubbock will begin at 8 a.m. with the 10,000m runs. The rest of the meet will commence at 1 p.m. Admission is free for all.