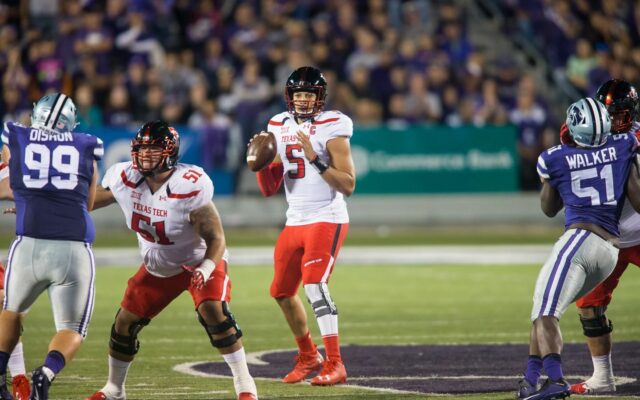 LUBBOCK, Texas – Fans will get their first glimpse of the Red Raiders under new head coach Joey McGuire on Saturday when Texas Tech hosts its annual Spring Game inside Jones AT&T Stadium. Kickoff is slated for 12:30 p.m. with television coverage provided nationally via Big 12 Now on ESPN+.

The Spring Game highlights a full day of activities on the Texas Tech campus. Below is additional information for fans leading into gates opening at 11:30 a.m. Saturday morning.

Texas Tech will broadcast the Spring Game live from Jones AT&T Stadium with John Harris and Chris Level on the call for Big 12 Now on ESPN+. The game will only be carried via the streaming network with additional coverage provided via @TexasTechFB on Twitter.

McGuire and his staff will split the Red Raiders into two teams for a special format that will pair Team Red Raiders versus Team Matadors. As part of the roster distribution, all offensive players will be in red uniforms Saturday with the defense in black as Team Red Raiders will be located on the home sideline, while the Matadors will occupy the visiting side of the field. Quarterbacks, wearing white uniforms, will rotate between the two teams, which will consist of the No. 1 offense and No. 2 defense on one side and the No. 1 defense and No. 2 offense on the other. The game will feature a 15-minute running clock that will only stop under two minutes in the fourth quarter as well as during any change of possession.

PLENTY OF PREGAME FESTIVITIES AVAILABLE PRIOR TO KICKOFF

There will be no shortage of pregame activities available prior to kickoff Saturday as Texas Tech will host several tailgates on the green space located immediately west of Jones AT&T Stadium. In addition, fans can enjoy live music, inflatable games, food trucks and more outside the west entrances to the stadium prior to kickoff. Live music will begin at 11 a.m. outside the Gate 1 entrance.

Parking will be available in the commuter lots immediately west of Jones AT&T Stadium and towards the Rawls College of Business. Parking attendants will only occupy the baseball gameday lots where a parking permit is required.

Texas Tech will host its semi-annual equipment sale in conjunction with the Spring Game as game-worn and excess Under Armour t-shirts, shoes and equipment will be available for purchase. The equipment sale will take place inside the Sports Performance Center from 10:30 a.m. to 1 p.m. Saturday. Fans can access the Sports Performance Center through the main track and field entrance located on the north side of the facility. Cashless payments will only be accepted Saturday and all sales will be final.

The excitement for the inaugural season under McGuire has already led to roughly 3,500 new season ticket holders through April. Fans can add to that number by locking in their seat for the 2022 season Saturday by speaking with ticket sales representatives located on the west stadium concourse. Season tickets are now available in all sections of Jones AT&T Stadium, giving fans the opportunity to pick their exact seat location by contacting a member of the ticket sales staff.

Fans attending the Spring Game will have a chance to catch a doubleheader of sorts as the Red Raider baseball program will host West Virginia in the second game of their weekend series beginning at 2 p.m. from nearby Dan Law Field at Rip Griffin Park. Tickets are limited for this weekend’s series and fans are encouraged to purchase in advance by contacting the Texas Tech Ticket Office at 806-742-TECH or by logging into www.TexasTech.com.

Texas Tech will have concession stand items for sale on the west concourse throughout the Spring Game. Beer and wine will also be available for fans 21 years and older. Beginning this Saturday, Jones AT&T Stadium will be a fully cashless venue, which will continue into the 2022 football season. All points of sale moving forward will accept credit and debit cards as well as Apple Pay, Google Pay and Samsung Pay.

NO SMOKING OR VAPING ALLOWED INSIDE ANY TEXAS TECH ATHLETICS VENUE

Jones AT&T Stadium is a smoke-free facility (includes electronic cigarettes and vaping). There are no smoking areas within the stadium. Fans wishing to smoke will need to entirely leave the stadium on Saturday.

Texas Tech’s clear bag policy will be in effect for the Spring Game on Saturday. Fans will be able to bring the following style and size bag or package into the venue:

· Small clutch bags, approximately the size of a hand, with or without a handle or strap can be taken into the venue with one of the clear plastic bags.

· An exception will be made for medically necessary items after proper inspection.

· Hand sanitizer and disinfectant wipes will be permitted into Jones AT&T Stadium.