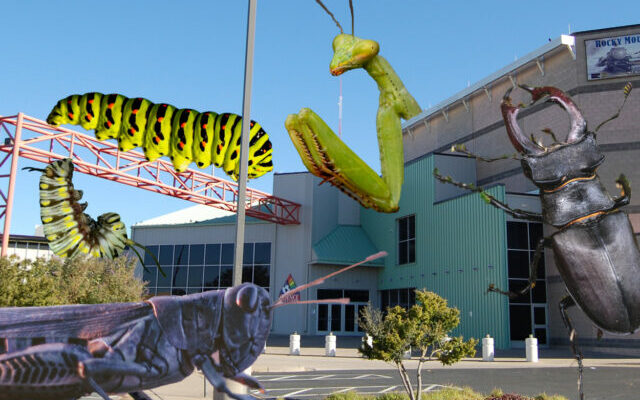 Bugs as big as a car are on the loose…! No, this is not a line from the latest B-movie script, it’s World of Giant Bugs!, the newest traveling exhibition on display at the Science Spectrum Museum from February 19th to May 22nd, 2022. This unique exhibit gives visitors a brand new perspective on the insect world as they are able to see these mysterious creatures up close and in a form that is larger than life.

The enormous insects on display are a spectacular blend of art and science. They are both breathtaking in form and movement, as well as scientifically accurate down to the last antenna. World of Giant Bugs! allows the visitor a clear observation of the behaviors and adaptations that have helped insects survive through the ages. A nineteen-foot praying mantis shows its threatening behavior that forces its prey to freeze in an attempt to avoid being eaten. A thirteen-foot locust spreads its mighty wings to take flight while two eleven-foot rhinoceros beetles battle each other like sumo wrestlers. A giant walking stick insect, over twenty-one feet long, displays its protective camouflage, and a fifteen-foot long swallowtail butterfly caterpillar wiggles and moves!

Also on display are three interactive insect heads with mouthpieces that are operated with a push of a button, allowing children to see how a dragonfly chews, how a bee sucks nectar, or a mosquito draws its meal through its piercing mouthpiece. There will also be a children’s activity area featuring bug puzzles, games, trivia, and much more!

Additionally, museum staff will be giving live bug talks and have a variety of hands-on activities and games exploring bug anatomy, life-cycles and habitats within the exhibit daily. Please check posted times upon arrival at the museum.

So bring the whole family for some educational fun, but please watch your step, there are bugs everywhere…!

For the full bug experience, visitors can also take in a screening of the film Bugs! A Rainforest Adventure showing in the OMNI Theater during the run of the World of Giant Bugs! exhibit.