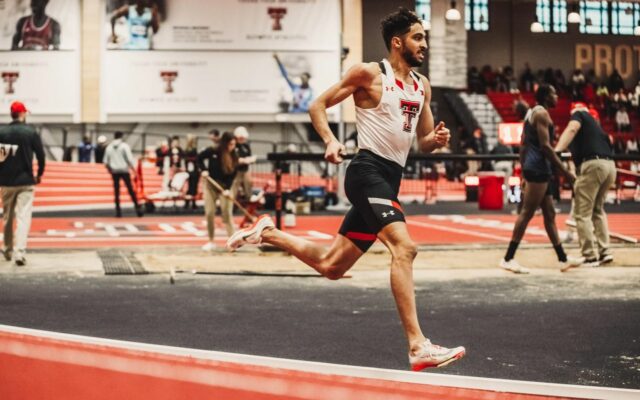 LUBBOCK, Texas – The Texas Tech track and field team wrapped up the final day of the Texas Tech Shootout Saturday afternoon, highlighted by Moad Zahafi breaking the school 1000m record that stood since 1987.

After an incredible run in the 800m Friday night, Zahafi was back at it again, racing only in the 1000m. The Moroccan etched a time of 2:19.99, taking down Zach Gwandu’s 1987 mark of 2:22.71. Despite the 1000m not being an NCAA event, Zahafi’s time leads his country of Morocco this year and it is second in the world standings.

The women placed four pole vaulters in the top 10 in a field that included the top 3 vaulters in the Big 12 currently. Chloe Wall led the team placing fourth with a height of 4.25m (13’-11.25”) as Oklahoma, Oklahoma State and Baylor made up the top 3.

The women’s 4×400 relay team of Aneesa Scott, Knowledge Omovoh, Dubarry-Gay and Price, turned in a season-best time for a relay team at 3:35.37 to finish second.

Texas Tech is back in action next Friday, Feb. 18 to host the Jarvis Scott Open – the final regular-season meet.