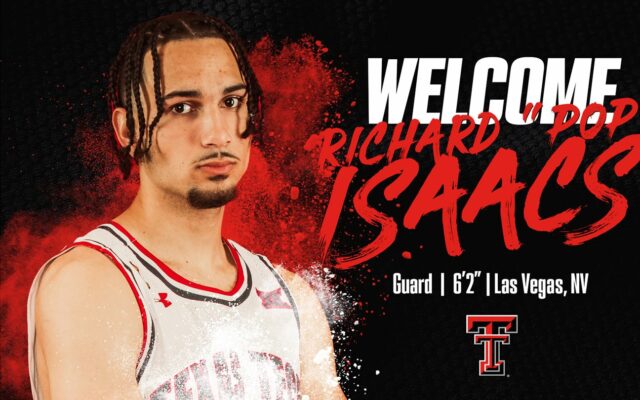 LUBBOCK, Texas – Texas Tech head coach Mark Adams has announced the signing of Richard “Pop” Isaacs to his national letter of intent for the 2022-23 academic year.

A versatile point guard, Isaacs is a senior at Coronado High School in Las Vegas who is listed as a four-star recruit by ESPN, Rivals and 247Sports.

“The trust and relationship I have built with the staff was important to me,” Isaacs said. “They really want me here and the fan base here is insane. I want to win a Big 12 Championship and hopefully and national championship. Also, I just want to give Texas Tech a player they’ve never seen before.”

Isaacs played at Wasatch Academy (Mount Pleasant, Utah) for the previous two years before returning to play at Coronado this season where he played as a freshman. He earned a gold medal while playing for the USA Basketball U16 team and also plays for Team WhyNot. Isaacs averaged 14.1 points and 2.4 assists per game last season at Wasatch Academy.

Isaacs chose Texas Tech over multiple offers including from Oklahoma State, Arizona State, Arkansas and UNLV. He joins Robert Jennings II who signed with the Red Raiders last week. Jennings is a forward from Desoto, Texas.