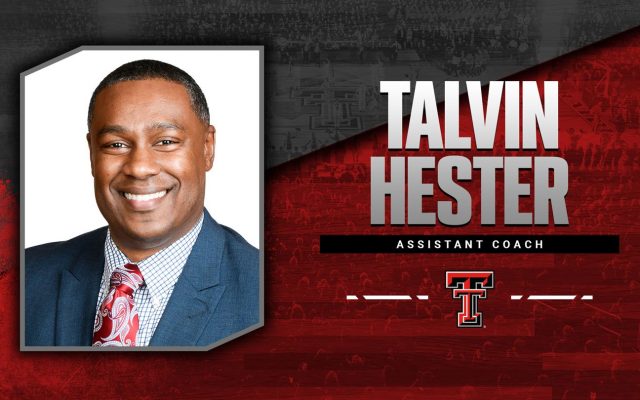 Adams added: “We are excited adding Talvin to our staff and think that he will make an impact on the court and in recruiting. He’s a very respected coach with a lot of experience throughout the state of Texas who has helped his teams to successful seasons everywhere he’s been. We are lucky to have him and I can’t wait to get to work with him.”

An Arlington, Texas native, Hester joins associate head coach Barret Peery and assistant coach Corey Williams to complete the coaching staff for Adams. The Red Raiders have advanced to three straight NCAA Tournaments, including advancing to the 2018 Elite 8 and 2019 NCAA National Championship Final. Tech reached the second round of the tournament last season with a first-round win over Utah State and has a 9-3 record in the tournament over the past three seasons.

“I’m a well-rounded coach who will do everything I can to help the program,” Hester said. “Recruiting has been a big part of my career but I bring development, floor coaching and work hard everyday for our players to be successful.”

Hester helped lead Louisiana Tech and head coach Eric Konkol to a 24-8 record last season and to a third-place finish in the National Invitation Tournament (NIT) with wins over Ole Miss, Western Kentucky and Colorado State. The Bulldogs were 12-4 in Conference USA play and saw Isaiah Crawford and Kenneth Lofton, Jr. earn All-Conference USA Third Team honors and Cobe Williams selected to the All-Defensive Team. Lofton was also selected as the C-USA Freshman of the Year after averaging 12.1 ppg. and 7.5 rpg. In his second season in 2019-20, the Bulldogs registered a 22-8 overall record during the regular slate before the season was canceled due to the coronavirus pandemic. Hester helped the team to 20 victories in his first season in Ruston, Louisiana with eight of the 20 victories coming against teams who also produced 20-win seasons, the most in program history.

Before LA Tech, Hester coached at Oral Roberts (2017-18) with head coach Paul Mills to help the Golden Eagles finish in a tie for fifth in the Summit League during Mills’ first season leading the program. Hester was instrumental in the recruitment of Kevin Obanor who would help lead ORU to the 2021 Sweet 16.

Hester also worked for Kelvin Sampson at Houston from 2014-17, helping turnaround the Cougars program which reach the 2020 Final Four. In his first season at UH, the program had a nine-win improvement from the 2014-15 to the 2015-16 season, posting 22 victories for the first time in eight years. The Cougars finished second in the American Athletic Conference and earned an NIT appearance which was their first postseason action since 2013. In his second season as an UH assistant, the program had a 21-win season in 2016-17, a third-place finish in the AAC and another trip to the NIT. While at Houston, Hester coached four All-AAC selections including Rob Gray and Damyean Dotson who became the first duo in the program’s history to be selected first team in the same season since 1990.

Hester spent one season as an assistant coach at Texas State (2013-14) and Stephen F. Austin (2012-13). While with the Lumberjacks, the team posted a 27-5 overall record and claimed the Southland Conference regular season title.

His first coaching experience outside the Lone Star State came at San Jose State from 2010-12. In his first year with the Spartans, they earned the first postseason bid for SJSU since 1996 (CBI) and a 17-16 record with the 17 wins being the most since the 1980-81 season.

He would spend five seasons at Prairie View A&M (2005-10) where he was promoted to the position of associate head coach. He helped the Panthers to winning records in both the 2008-09 and 2009-10 season, the first time registering back-to-back winning seasons in decades.

Hester began his coaching career in 2002 at North Lake College in Irving, Texas before he spent one year at his alma mater Texas Wesleyan and one at Texas College. His coaching resume also includes a stop with the Texas Rim Rockers of the United States Basketball League as an assistant coaching intern and the Dallas Mustangs AAU team for one season. He was an assistant coach at Texas College in Tyler, Texas for the 2004-05 season before going to Prairie View A&M.

As a student-athlete, Hester played at Dallas Christian College during the 1996-97 season. He received his bachelor’s degree in interdisciplinary studies from Texas Wesleyan in 2003.

Hester is married to the former Jamieka Jackson and they are the parents of a daughter, Rhyan.