Cumbie to be retained as Texas Tech’s offensive coordinator 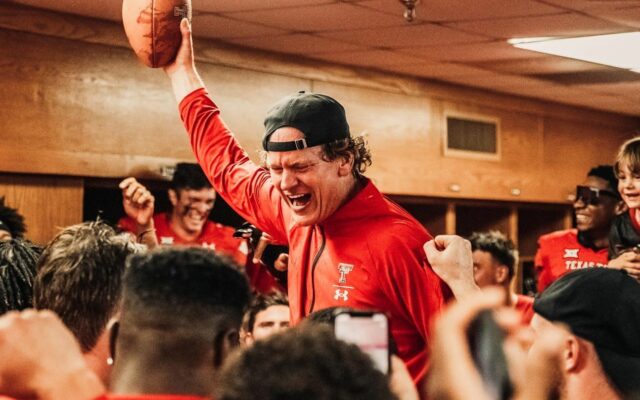 “Sonny Cumbie is one of the top offensive minds in the country, and we are fortunate to have him remain on our staff here at Texas Tech,” McGuire said. “Like I said in my opening press conference, I want to build a staff here that will deeply invest in our players. That’s who Sonny Cumbie is to his core, and that’s been evident in the play of this team the past three weeks. We are excited for the brand of offense we will have under Coach Cumbie’s direction.”

Cumbie, who will remain in his role as interim head coach through Tech’s bowl game, pushed the Red Raiders to their 39th bowl appearance in school history just a few weeks ago when Tech topped Iowa State, 41-38, at home for its sixth win. Cumbie returned to his alma mater prior to this season following seven years at TCU where he helped build one of the nation’s top offenses.

“I’m thankful for the opportunity Coach McGuire has provided me and my family to remain with this program,” Cumbie said. “It’s no secret how much I love this place and this program, and I am looking forward to working closely with Coach McGuire on making this program successful year-in and year-out. I’d be remiss if I didn’t thank our players and coaches as well as they have poured their hearts into this program the past few weeks.”

Cumbie is the first on-the-field coaching hire for McGuire thus far as additional staff announcements are expected in the coming days. McGuire has already tabbed three members to his off-the-field staff in James Blanchard (Director of Player Personnel), Cody Bellaire (Director of Scouting) and Dave Martin (Director of Player Development).