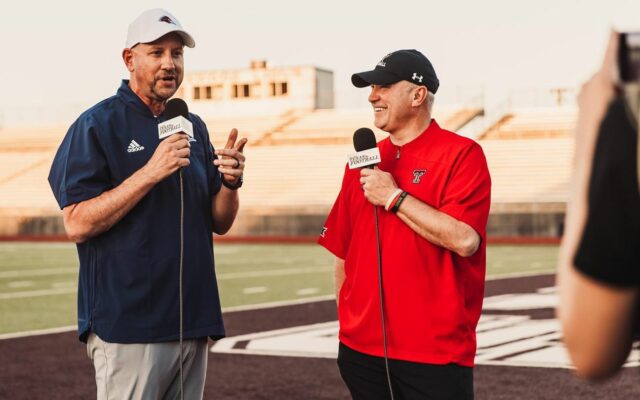 The magazine cover highlights the significant ties to the state of Texas for both McGuire and Traylor, two former highly successful high school coaches in the state who are now in prominent roles leading the Red Raiders and Roadrunners. In addition to covering every FBS and FCS collegiate program in the state, DCTF provides an in-depth analysis of every high school in Texas, ranging from the 6A all the way to 1A levels.

“It is a dream come true to be on the cover of Dave Campbell’s Texas Football,” McGuire said. “This is so special to not only me and my family, but also every high school coach in the state of Texas. To see two former high school coaches on that cover is special. Dave Campbell’s has always kicked off football season for me, so to be on the cover this year in our first year building this program, that will be something I won’t forget.”

McGuire becomes the fourth Red Raider head coach to grace the DCTF cover and the first since Patrick Mahomes II and his then head coach Kliff Kingsbury adorned the 2016 edition. The magazine has also featured the likes of Michael Crabtree, Graham Harrell and Mike Leach on its cover in 2008 as well as former greats such as Rodney Allison and Donny Anderson.

In addition to Leach and now McGuire, legendary head coach Spike Dykes made two appearances on the magazine cover, doing so the first time in 1990 before joining several of his peers in 1996 to commemorate the first season in the Big 12 Conference.

The magazine will hit stores throughout Texas this summer and can be purchased in advance by visiting www.TexasFootball.com.