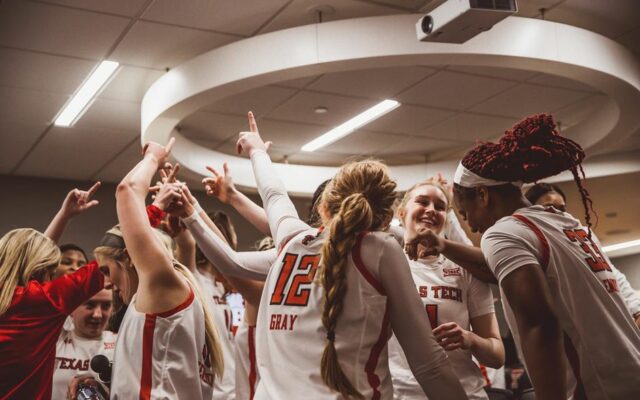 LUBBOCK, Texas – There’s something about playing a ranked Big 12 team this season.

The Lady Raiders never trailed Saturday and led for 39 minutes and 24 seconds of a possible 40 minutes.

In the fourth powered by a defensive clinic from forward Khadija Faye, the Lady Raiders held All-America candidate and potential Big 12 Player of the Year Ayoka Lee and the Wildcats to just two points and 1-for-17 shooting.

Tech outscored the Wildcats 11-2 in the final period to cruise to a 19-point victory.

And while Gray’s offensive performance was important, maybe the most critical performances for the Lady Raiders came from Faye and guard Bryn Gerlich.

Returning to the starting lineup for the first time since for time since Dec. 21 against LSU, Gerlich dropped a career-high 16 points (nine in the first) and four triples. The guard added five rebounds and five assists in her nearly 35 minutes of action.

Not to be outdone, Faye had 11 points, eight rebounds and five steals. Faye’s biggest impact however came on the defensive end, as the forward frustrated Lee, holding her to just 12 points and 12 shot attempts.

The third-leading scorer in the country, Lee failed to get a double-double for just the sixth time this season. Tech held her to her second-fewest point total of the season, and to half her season average (24.2) entering the day.

Lee was joined in double figures by true freshman Serena Sundell, who also scored 12 points on 4-of-13 shooting.

Powered by Gerlich and the 3-point shot, the Lady Raiders opened Saturday’s game on a 13-3 run.

After Kansas State answered with four of the next six to pull to within 15-7, Tech used a jumper from Gray to kickstart an 8-0 run over the final three minutes and 16 seconds.

Gerlich made all three of her attempts from behind the arc in the opening period, as the Lady Raiders enjoyed a 23-7 lead after one.

Tech opened the second with a triple from Rhyle McKinney. The shot gave the Lady Raiders a 26-7 lead with 9:35 to play.

Right before the break, the Lady Raiders used a jumper from Gray and four points from Faye to take a game-high 40-20 lead with 76 seconds left in the first half.

Neither team was able to break the ice in the fourth, until Gray hit a clutch jumper two minutes and seven seconds in the period. The shot gave Tech a 57-43 lead with 7:53 to play.

Tech held Kansas State scoreless until the 5:53 mark of the period, when Lee answered a Gerlich jumper with a layup. The shot brough K-State to within 57-45.

After the teams traded turnovers, the Lady Raiders used a massive 3-pointer from Gerlich to jump back in front by 15 (60-45) with 4:58 to play.

The Lee layup were the only points that Tech would allow in the final quarter, as K-State missed its final 11 shots.

With the win, the Lady Raiders snapped a two-game losing streak and improved to 4-3 this season after a loss.

• Gerlich’s 16 points were a career-high. She previously set her career high of 14 back on Nov. 28 against New Mexico.
• The Lady Raiders have defeated a pair of ranked teams in a season for the first time since 2010-11.
• Tech outrebounded the Wildcats 44-36.
• The Lady Raiders have now outrebounded all five Big 12 opponents this season.
• With the 44 rebounds, Tech has now recorded 40+ rebounds in four straight games.
• The Lady Raiders are 5-2 this season when grabbing at least 40 boards.
• K-State’s 45 points are the second-fewest by an opponent this season. Tech allowed just 44 against Weber State back on Nov. 16.
• K-State had just 18 field goals, marking the fifth time Tech has held an opponent to fewer than 20 made field goals. They are 4-1 in those five contests.
• The two points allowed in the fourth quarter tie the fewest points allowed in a quarter in school history. The Lady Raiders also held Purdue Fort Wayne to just two points in the fourth back on Nov. 29, 2019.
• Gray recorded her fourth 20-point game of the season.
• Tech turned the ball over just four times in the first half, and 13 times for the game. The four turnovers in the first half are the fewest Tech has recorded in a half this season.

“First off, I want to thank the crowd for coming out, particularly the students for coming out and helping us. It’s so much better when we have a large crowd, and have some support, especially when the other team goes on runs and we need a boost. I want to thank them and encourage them to keep coming back. I’m so proud of our girls. Today was probably the most complete game that we’ve played this season from start to finish, in terms of following our game plan and keeping our composure. And just continuing to do the little and easy things that we focused on. Vivian played with a lot of poise and patience with the ball in her hands. She really stayed locked in and made it difficult for their shooters. Bryn did a fantastic job of getting us started and being confident in her shot. She knocked down some big ones and played with great emotion. We need that emotion, passion and some swagger. We saw that in her today. So, I was really pleased. Obviously, Hadi Faye had an exceptional game. She really battled and followed our game plan against Lee. She’s a tough player to guard and defend, and Hadi did a fantastic job on her all night.”

On the crowd and the over 1,000 students in attendance:
“Our girls did a good job of hooking the fans. If you come out and watch a team dominate from the start of the game like we did tonight, and give such effort, I hope that would be fun. And I also hope that they will come back and help us because we can fill this place up. That’s something our students can help us with. How cool would it be to have the student section packed for women’s games like it is for the men. Let’s come in here, watch some great basketball and rally around these two teams. And show the country what being a Red Raider is all about. Supporting your school, loving one another and loving the red and black. I just appreciate them so much. I hope they continue to come out and get on board because if they do it will be a lot of fun.”

The Lady Raiders hit the road next week for a pair of contests at TCU and at Kansas. Tip-off for the matchup against the Horned Frogs is set for 6:30 p.m.