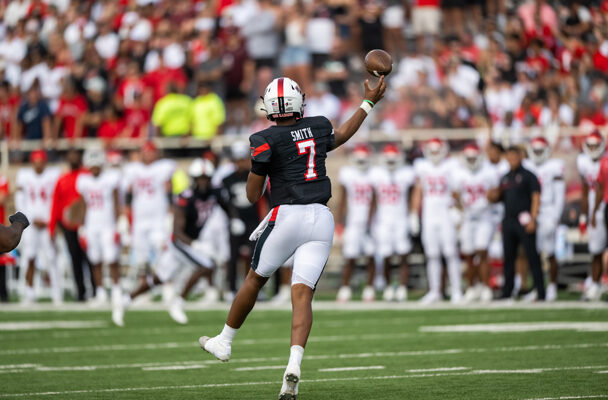 LUBBOCK, Texas – Texas Tech sophomore quarterback Donovan Smith was tabbed the Big 12 Offensive Player of the Week on Monday after leading the Red Raiders to a thrilling 33-30 double-overtime win over No. 25 Houston.

This is the second career weekly accolade presented to Smith, who was previously the conference’s top newcomer on Nov. 15 last season following another down-to-the-wire victory against Iowa State. He is the first Red Raider to garner Offensive Player of the Week accolades since Jett Duffey on Oct. 7, 2019.

Smith had a career day against the Cougars, setting career highs for passing yards (350), completions (36) and passing attempts (58), while also rushing for 31 yards on 21 carries. Two of his final carries on the day proved to be difference makers overall as he snapped his career-long run with a 27-yard scamper late in regulation that eventually set up a game-tying field goal from Trey Wolff with three seconds remaining.

Smith later found the end zone for the game-winning touchdown in the second overtime as he scrambled untouched up the middle to push the Red Raiders to their first victory over a ranked opponent since 2019. It was Texas Tech’s first win over a top-25 non-conference foe since defeating No. 20 Arizona to start the 1989 season.

Smith totaled 79 total offensive plays (rushing and passing attempts) on his own against the Cougars, which ranked as the second-highest total for a Red Raider dating back to 2000. He trailed only the 100 total offensive plays Patrick Mahomes II took part in during a record-setting night against Oklahoma in 2016. Smith’s 21 rushing attempts, meanwhile, were the most by a Red Raider quarterback since Zebbie Lethridge had the same total in the 1996 season opener versus Kansas State.

Smith is now 3-2 as a starter after leading the Red Raiders to a pair of memorable wins a year ago against Iowa State and then Mississippi State in the AutoZone Liberty Bowl. He is averaging 285.5 passing yards per game thus far this season despite playing in roughly a quarter and a half of Texas Tech’s win over Murray State. As a team, Texas Tech leads the country in passing yards per game, averaging 411.0 yards through two games.

Smith will make his sixth career start Saturday when the Red Raiders face another ranked opponent in No. 16/12 N.C. State. Kickoff is slated for 6 p.m. CT Saturday in Raleigh with coverage provided nationally on ESPN2 and the Texas Tech Sports Network.