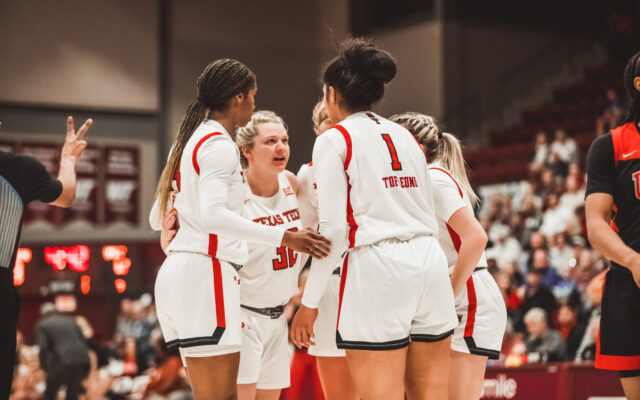 LAKE WORTH, Fla. — Down All-American Vivian Gray and without forward Khadija Faye for the entire second half, the Texas Tech Lady Raiders fell to the Ole Miss Rebels 65-50 Monday afternoon at Palm Beach State.

Gray, did not travel with the Lady Raiders to Florida and will be unavailable for tomorrow’s contest against No. 21 LSU.

Over the final three periods, Ole Miss (11-1) ratcheted up the defensive pressure, holding Tech to just 35 points over the final 30 minutes of play.

Ella Tofaeono led the way for Tech, scoring 11 points on 4-of-5 shooting, while Bryn Gerlich hit 3-of-5 to add 10 points.

Scott scored five points in her seven minutes of action. The transfer made her Texas Tech debut after missing the first nine games of the season due to injury.

For the ninth time in 10 games, the Lady Raiders enjoyed a lead at the end of the first period.

Behind four quick points from transfer Lexy Hightower and a layup from Gerlich, the Lady Raiders used an early 6-0 run to race out to a 10-4 lead in the opening quarter.

After an early Ole Miss timeout, a Faye layup with 5:44 to play increased the Lady Raider advantage to a game-high eight (12-4).

Ole Miss would respond over the next nearly three minutes, using a jumper by SEC Player of the Year candidate Shakira Austin to spark a 6-0 run that cut the once 12-4 Tech lead to just 12-10 with 2:50 to play.

Tech clamped down defensively holding the Rebels scoreless over the final 2:50 of the period. The defensive stand allowed the Lady Raiders to build the lead back to five (15-10) at the end of one.

After Ole Miss scored the first three points of the period, Tech used a Hightower triple to take an 18-13 lead with 8:58 to play in the half.

Needing a spark, Ole Miss turned to Angel Baker, who scored eight of the next 10 points Ole Miss would score. Coinciding with a Tech scoring draught of over six minutes, the Rebels flipped the five-point deficit into a 25-20 lead with 1:09 to play in the second.

A Scott jumper, the first points she scored in a Tech uniform, briefly cut the deficit to just 25-22 with 59 second left, but a Donnetta Johnson jumper with 45 ticks to play gave Ole Miss a 27-22 halftime advantage.

Looking for a spark, Tech turned to true freshman Chantae Embry, who scored the next seven, to bring her team to within 39-34. The final basket, a triple, forced an Ole Miss timeout with 2:54 to play.

After the breather, Ole Missed scored the final eight points of the period to take a 47-34 lead after three.

In the fourth quarter, Tech opened the fourth with a pair of Gerlich free throws to draw to within 11, but Ole Miss used one last 10-0 run to take a game-high 57-36 lead with 6:15 to play.

Powered by eight points from Tofaeono, Tech scored 14 of the final 22 points, before falling 65-50.

COACH SPEAK (HC Krista Gerlich):
“Ole Miss is a good basketball team. They have a lot of athleticism and we knew that coming in. I didn’t think we handled that very well overall. In the first quarter, I thought we attacked them really well. But in the second quarter we got stagnant and had too many unforced turnovers. Overall in the second half we didn’t handle their pressure very well. We didn’t make the plays we needed to make offensively to force them to change it up.”

On Chantae Embry and Bre Scott:
“Chantae came in and did a great job and continued to attack and score the ball well. But we need to continue to rebound and guard in that same situation. And then it definitely helped having Bre back. She has to continue to get more and more confident on her foot and in our system. But overall, I thought she handled her first game action pretty well today.”

GUARD BRE SCOTT:
“Obviously today would have been better if we got the win, but it was great to get feet wet and get back out there. I played a couple of minutes and it was good to start to get used to how everybody plays and how I need to play for coach Gerlich. It was good to get some reps in today. We need to lean how to maintain the energy and confidence that we show in the first quarter for the entire game. In a lot of games this season we’ve started well and our level drops. We need to maintain our energy and focus, and stay locked in and engaged like we have been in the first quarter.”

UP NEXT:
The Lady Raiders will look to bounce back tomorrow afternoon, when they clash with No. 21 LSU. Tip-off from Keiser University is set for 2:30 p.m. (CT).