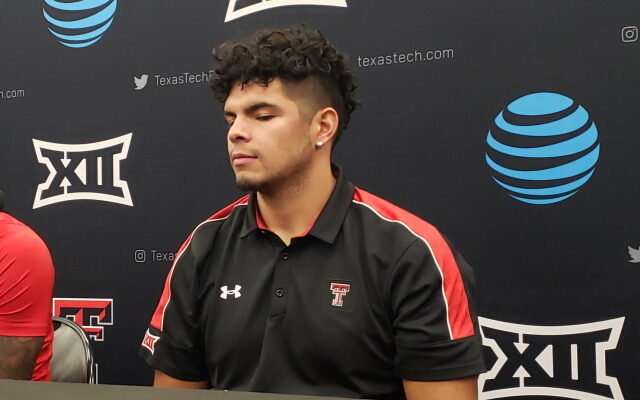 “I want to thank my friends and family for the love and support throughout my career,” Garibay said in a post to his Twitter account. “A huge thank you to Coach (Matt) Wells and his staff for giving me the opportunity to further my academic and athletic career here at Texas Tech. Not only did it change my life, but it also changed my family’s life. Thank you to my teammates for helping me create unbelievable memories and relationships that will last for a lifetime.

“I truly found a second family here at Texas Tech. Another thank you to Coach (Joey) McGuire and his staff for being patient and supportive throughout this whole process. Last but not least, thank you to all Red Raider Nation for the awesome support this whole season. You are truly the best fans in the country. With that being said, I would like to announce that I will be declaring for the 2022 NFL Draft.”

Over his two seasons, Garibay developed into one of the top kickers in college football, connecting on 23 of his 27 field goal attempts during that span and 55-of-57 PATs. Garibay was an impressive 15-of-16 on field goal attempts this past season, which led the Big 12 and ranked sixth nationally for field goal percentage (93.8).

Garibay was moved into the starting kicker role late in the 2020 campaign as he found the uprights on each of his four attempts against Baylor. The performance included the game-winner from 25 yards out at the end of regulation, wrapping a memorable night where he became only the sixth kicker in Big 12 history to connect on four field goals in a debut and only the second to do so versus a conference opponent.

It was one of three game-winning field goals over Garibay’s career to lift the Red Raiders to a win in the final minute as he also connected on similar successful tries this past season at West Virginia and then against Iowa State. Garibay helped the Red Raiders hold off the Mountaineers with a 32-yard attempt in the final minute before sending Texas Tech back to bowl eligibility with an historic 62-yarder against the Cyclones.

Garibay’s kick against Iowa State marked the longest by a Red Raider in school history, snapping the previous mark of 57 yards that was set by Bill Adams in a 1977 game against Texas A&M. Additionally, it marked the longest game-winning field goal in FBS history (less than a minute remaining) and was tied for the third-longest by a FBS kicker since the NCAA disallowed the use of kicking tees prior to the 1998 season.

Garibay drilled his first 13 field goals of the season, matching the Texas Tech record for most-consecutive successful attempts that was previously set by Clayton Hatfield during the 2018 season. With his two field goals in the AutoZone Liberty Bowl, Garibay moved past Hatfield for the highest career field goal percentage in school history, finishing at 85.2 percent, which was just higher than Hatfield’s previous mark of 84.7 percent.

Garibay, who redshirted the 2019 season after transferring from Riverside City College in his native state of California, is one of three Red Raiders with eligibility remaining to declare for the upcoming NFL Draft, joining the likes of offensive lineman Dawson Deaton and wide receiver Erik Ezukanma.