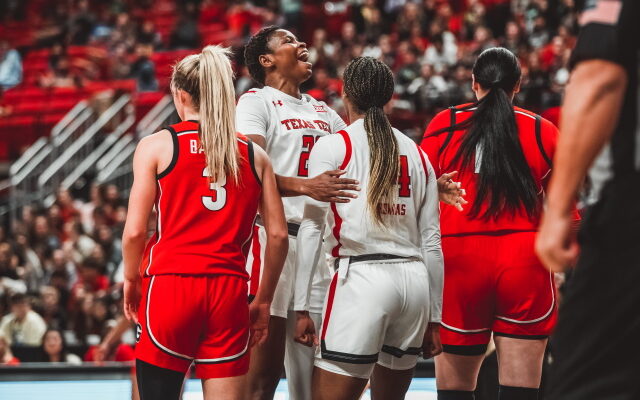 LUBBOCK, Texas – Despite the return of All-American Vivian Gray and a strong performance from Khadijia Faye, the Texas Tech Lady Raiders fell to the No. 20 ranked Georgia Lady Bulldogs 66-56 Thursday morning at United Supermarkets Arena.

In her return from injury, Gray scored 12 points for the Lady Raiders, while forward Faye scored a team-best 15 points. The forward also added 7 rebounds and 4 blocks.

Gray and Faye were the only two Texas Tech (6-2) players in double-figures Thursday.

In the end, it was the vaunted Georgia (7-0) defense that made the biggest impact on the contest. The Lady Bulldogs turned 21 Tech turnovers into 26 points and held the Lady Raiders to just 35 points over the final three-quarters of play

Georgia had four players in double-figures, led by guard Que Morrison who scored a game-high 20 points, including 16 after the break.

Thursday’s education day matinee got off to a dream start for the Lady Raiders, as a Faye blocked shot jumpstarted a 9-0

Tech run over the first three minutes and 47 seconds.

After Georgia used an 8-2 run to cut the Lady Raiders lead to just 13-10, Tech used back-to-back layups from Ella Tofaeono and Gray to bring the lead back up to 17-10.

Despite another 4-0 run from the Lady Bulldogs that cut the score to 17-14 with 95 ticks to play in the opening period, Tech closed the period on a 4-0 run to take a 21-14 advantage into period two.

The Lady Raiders opened the second period with a three-point play from Faye, that gave them a game-high 24-14 lead with 8:47 left in the period.

Georgia would respond over the next two minutes, scoring five straight points, to cut the Tech lead to 24-19 with 6:41 to play.

As they did the entire first half, the Lady Raiders answered the UGA run, holding the Lady Bulldogs scoreless over the next three minutes and 31 seconds. The drought increased the Tech lead to 28-19 with 3:26 to play.

Needing an answer, Georgia manufactured a 6-0 run to cut the once 10-point Tech lead to just 28-25 at the break.

A Rhyle McKinney jumper capped a 6-2 Tech run that gave the home team its final lead of the contest, a 38-36 advantage with 3:08 to play.

Over the final three minutes, Georgia scored 10 of the final 14 points to take a 46-42 lead after three.

Back-to-back layups from Faye brought the Lady Raiders to within 52-50 with 4:36 to play, but Georgia used big baskets from Morrison and Jordan Staiti to spark an 8-2 run that gave the SEC program a 60-52 lead with 2:05 to play.

Tech was able to draw to within 60-54 with 1:05 to play, but Georgia nailed all six of its free-throw attempts in the final minute to hold on for a 66-56 victory.

• Gray also added six rebounds, four assists and a pair of steals.
• Chantae Embry scored seven points Thursday, on perfect 2-of-2 shooting. The Oklahoma native was also a perfect 3-for-3 from the line.
• The Lady Raiders failed to make a 3-point shot (0-5) for the first time since Feb. 10, 2021 against Baylor. Tech was 0-for-13 in that game.
• After scoring 88 points in the first seven games, and reaching double-figures in six of seven, Lexy Hightower was limited to just two points.
• The Lady Raiders scored 40 of their 56 points in the paint.
• Tech outrebounded Georgia 38-36.

“It was a really hard-fought game and a great atmosphere. We definitely want to continue to build off this. I don’t like to take moral victories out of losses, but I thought our kids came out and competed hard. But we’re still lacking experience in late-game situations. We need to learn how to make big shots and free throws. We did defend them well for a while, but they hit some big shots in the second half. Overall, we never panicked. We let them grow the lead a couple of times and responded, but we never found a way to respond back-to-back times with another basket or stop. Hadi Faye was really impressive and strong. She battled with some of the best in the country and held her own. Vivian really competed hard and showed a lot of courage in her first game back from injury. We played her a few more minutes than we anticipated but it’s hard to take her off the floor because she’s such a warrior. And I thought Taylah played really well. She was aggressive, followed the game plan and tried to get to the rim. She also rebounded it well for us. I’m proud of the girl’s effort, and we need to build on this, to get better over the next 10 days.”

The Lady Raiders will take a 10-day break between games for finals week. Tech returns to action a week from Sunday when they travel to Canyon to face UNLV. The game will a homecoming of sorts for HC Krista Gerlich and Lexy Hightower . Gerlich spent seven seasons (2006-13) as the head coach of West Texas A&M, while Hightower played for the Lady Buffs the last five seasons. Tip-off from the First United Bank Center is set for 2 p.m.