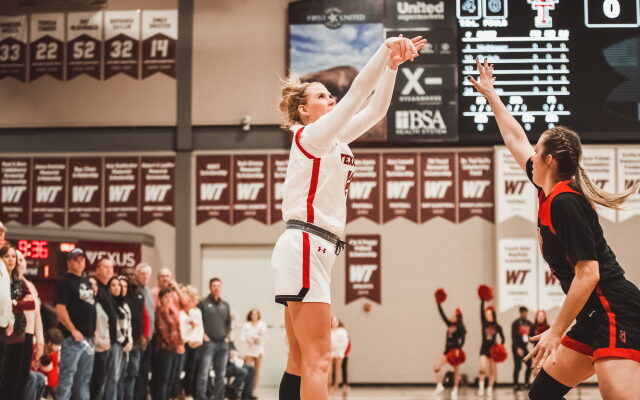 Sunday’s contest was a homecoming for five members of the Texas Tech (7-2) program, as head coach Krista Gerlich, Bryn Gerlich, Lexy Hightower, Jared Boyd and Jordan Vessels all returned to West Texas A&M and the FUB for the first time. Gerlich spent seven seasons as the head coach of the Lady Buffs program, while Boyd and Vessels both graduated from WT. Hightower joined the Lady Raiders this past spring after spending five seasons at WT.

HOW IT HAPPENED:
Behind a pair of triples from Gray and Hightower, the Lady Raiders opened Sunday’s contest with an 8-2 run over the first two minutes and eight seconds.

UNLV would answer with five of the next six points to cut the Tech lead to just 9-7 at the 4:18 mark.

Forward Ella Tofaeono sparked a 10-2 Lady Raider run over the next three minutes of action, that gave her team an 19-9 lead with 79 seconds to play in the opening period. Tofaeono finished with 13 points in just 18 minutes of action.

Tech increased its lead to 21-10 at the quarter break when forward Taylah Thomas nailed a pair of free throws with just three ticks left. Thomas finished with nine points and 12 rebounds, narrowly missing out on another double-double.

Back-to-back triples from Thomas and Gerlich, increased Tech’s lead to 31-22 at the 4:01 mark of the second period.

UNLV would cut the Lady Raider lead to 33-25 with 84 ticks to play in the first half, but buckets by Gray and freshman Chantae Embry gave Tech a 37-27 lead at the break.

After the Lady Raiders scored 12 of the first 21 points of the third period to lead 49-36 with 3:50 left, UNLV clamped down, using an 8-0 run over the remainder of the quarter to cut a once 13-point deficit to just 49-44 at the third quarter break.

In the fourth, UNLV was able to cut Tech’s lead to three four times over the first four minutes and 26 seconds of the quarter.

However, each time the Lady Rebels scored, the Lady Raiders were able to find an answer, including a 5-0 run that increased a once 55-52 advantage to 61-54 with 4:03 to play.

UNLV used a contested Desi-Rae Young jumper to cap a 5-0 run that cut the Lady Raider advantage to its smallest margin, 61-59 with 122 seconds left. Playing with four fouls, Young thought she was fouled and ended up on the ground. While on the ground, Young said something to official Scott Yarbrough.

In the end, Young’s dissention earned her a technical foul that both disqualified her from the contest and gave Hightower and the Lady Raiders a pair of free throws. The technical was Young’s fifth personal foul of the contest, as she fouled out with 19 points, six boards and foul steals.

Hightower calmly sunk both of the free-throws to give her Lady Raiders a 63-59 advantage with 1:49 to play.

On the ensuing UNLV possession, Tech forced a missed 3-pointer from Kiara Jackson with 1:23 to play, but the Lady Rebels were able to secure the offensive rebound.

With a second-chance, UNLV turned to Khayla Rooks who missed a jumper in the paint. Gerlich secured the key rebound but threw an errant pass that missed Gray and bounded out of bounds.

The Tech turnover, the 19th of the contest, gave possession of the basketball back UNLV, who used a jumper from Jackson to cut the deficit to just 63-61 with 42 seconds left.

Needing an answer, the Lady Raiders turned to Gray, who nailed a jumper that gave her team a 65-61 lead with 34 ticks to play.

Tech got a defensive stop on the ensuing UNLV possession, and Thomas secured her 12th and final rebound of the contest. The stop forced UNLV to foul, putting Tatum Veitenheimer on the line for a pair.

After missing the first, Veitenheimer calmly sank the second shot, giving her team a 66-61 lead with six seconds left.

Gray and the Lady Raiders used a defensive stop and two more made free throws to hold on for 68-61 victory.

With the win, Tech improves to 2-0 this season following a loss.

COACH SPEAK (HC KRISTA GERLICH):
“We knew UNLV would not go away. UNLV is a very good basketball team that is extremely well coached and knows what they do well. We did not respond well to a few situations, but I did think we held on and found a way to win. In the first half we did a lot of thing well, but in the second half we just did not put them away by any means. But credit UNLV for that.”

On the crowd:
“I need to thank everyone in West Texas and the panhandle. All of the Red Raiders and the WT people. This weekend was great, and I want to thank WT for allowing us to do this and for being such gracious hosts. It was a great atmosphere, and I hope the fans had a good time and will drive down to come see us play. I love the people here and I’m so glad that so many of them were able to come out and see us. It was great to see so many familiar faces and to hear the crowd when Lexy made that first three.”