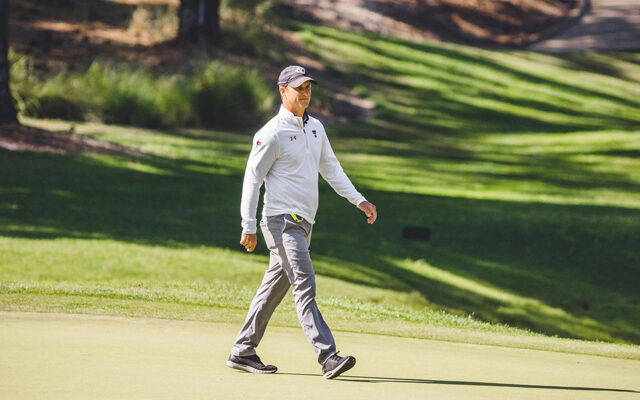 LUBBOCK, Texas – Greg Sands, who has led the Texas Tech men’s golf program to unprecedented heights during his nearly 21 full seasons as head coach, has signed a seven-year contract extension that was approved Thursday by the Texas Tech University System Board of Regents.

Under the terms of the extension, Sands will remain Texas Tech’s head men’s golf coach through the 2029-30 season as part of a contract worth roughly $2.8 million. The raise in compensation will make Sands one of the highest-paid collegiate golf coaches in the country.

“Greg Sands is without question one of the premier college golf coaches in the country,” Texas Tech Director of Athletics Kirby Hocutt said. “Through his leadership, our golf program has continued to rank as one of the nation’s elite programs, rising to as high as No. 1 in the national rankings this fall. I firmly believe our golf program’s best days are still ahead of us thanks to Coach Sands’ continued leadership.”

The Red Raiders are national-title contenders again this season after returning the bulk of their lineup from a year ago, namely the reigning Ben Hogan Award winner in senior Ludvig Aberg. Texas Tech is currently No. 3 in the Golfstat national rankings after a strong fall that saw the Red Raiders win the Inverness Intercollegiate, the Ben Hogan Collegiate Invitational and the Big 12 match play event.

Sands, who was inducted into the Golf Coaches Association of America Hall of Fame in Dec. 2021, is the second-longest tenured head coach on campus as he has led the Red Raiders to 28 team titles and 30 individual tournament wins over two decades of success.

Texas Tech will look to add to those totals this spring as the Red Raiders resume their 2022-23 slate Feb. 8-10 at the Amer Ari Invitational hosted in Hawaii.

“I’m so humbled and honored to have the opportunity to have my contract extended. The opportunity to continue to coach and recruit great young people to Texas Tech with the hope to mold and coach them in the game of golf and life is such a blessing and labor of love. I’m so grateful for my assistant coach, Nathan Weant, our director of operations, Brooklyn Dendle, as well as Drew Krueger and Scott Ramsey in sports medicine and strength training. This day would not have been possible without the former players and all their hard work and dedication to this program. Everything we have accomplished on and off the course is a testament to everyone I just mentioned. I’d be remiss not to mention my family, namely my wife Stephanie and our four children, who continue to support my dreams as well as our student-athletes, making this truly a program built on family. We are truly Red Raiders as my oldest is a sophomore now at Texas Tech while my daughter, Reese, will be a student here beginning next year.

I can’t thank our athletics director Kirby Hocutt and our amazing sport supervisor, Deedee Brown-Campbell, as well as President (Lawrence) Schovanec enough for all their leadership and vision within our athletics department and our university. Finally, the generosity of Jerry Rawls, the Clay Cash family, Fin Ewing, Carl Webb, Dusty Womble and so many others has helped our men’s and women’s golf programs move into the future with confidence. This is just the beginning. Wreck ‘Em!” – head men’s golf coach Greg Sands

“Greg is obviously one of the brightest, most-highly respected coaches in the country. He took a program over his time at Texas Tech and has elevated it to national prominence. He has served as a past president of the GCAA and has been a great member of our board for 10-plus years. His impact as a coach, on his players and the work he has done for the GCAA speaks for itself. He is down to earth. He’s articulate, and he relates to others extremely well, namely his players. He’s one of the top influencers in college golf across the country in all divisions.” – Gregg Grost, executive director of the Golf Coaches Association of America (GCAA)