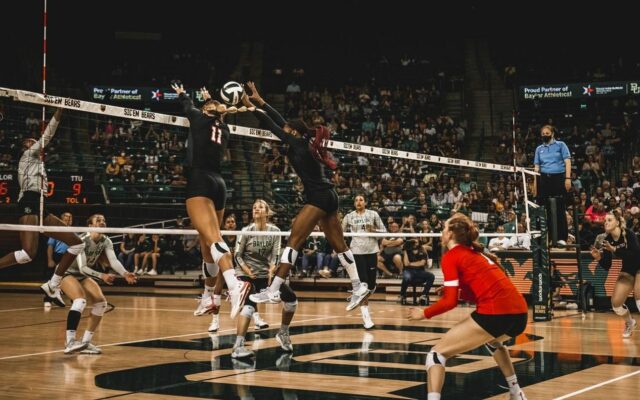 IRVING, Texas – Texas Tech volleyball added on to a historic season with a pair of All-Big 12 earners as Kenna Sauer picked up All-Big 12 First Team honors and Karrington Jones was named to the All-Big 12 Second Team.

The distinctions are the first All-Big 12 awards for both Sauer and Jones and mark the ninth straight season a Red Raider has earned All-Conference honors.

Sauer, a junior from Ankeny, Iowa, finished the season ninth in the conference in kills per set (3.33) and seventh in points (403). The Missouri transfer made her mark during her first season in Lubbock, leading Tech in kills (346), kills per set, points and total attempts (1,115). She tallied 10 double-doubles, tied for the most on the team, and recorded double-digit kills in 18 of 29 outings and double-digit digs 12 times.

The outside hitter twice earned Big 12 Offensive Player of the Week honors, first on Sept. 21 after averaging 4.9 k/s at the Green Wave Invitational where she was named Tournament MVP. Sauer set a career-high with 30 kills in four sets against Sam Houston, which marks the most kills in a match by a Big 12 player this season. She earned the honors for a second time on Oct. 12 after posting back-to-back 20-kill performances against Iowa State, averaging 4.44 k/s. After a double-double of 20 kills, 13 digs in the first match against the Cyclones, she added another 20 kills and a season-high six blocks in the next match.

Jones earns her first All-Big 12 honors after a career-year by the senior. The middle blocker ranks fourth in the Big 12 in hitting percentage (.356) which is the 65th best mark in the NCAA. Her 211 kills are third on the team, and a single-season career high, averaging 2.09 k/s. Jones’ 81 blocks rank second on the team, with 12 solo blocks and 69 block assists. She has also posted a career-high six service aces this season.

The Little Elm, Texas native earned Buffs Invitational All-Tournament Team honors in September after recording 21 kills and a .513 clip during the tournament with nine blocks. Jones posted a career-high 13 kills on a .600 clip against TCU (11/6) and recorded 147 total kills in Big 12 play, hitting .331. She managed double-digit kills in 10 matches and registered 5+ blocks in eight matches.

Both Sauer and Jones look to make a big impact for the Red Raiders as they prepare for their first NCAA Championship appearance in 20 years on Friday when they take on FGCU at 4:30 p.m. in Madison, Wisconsin.