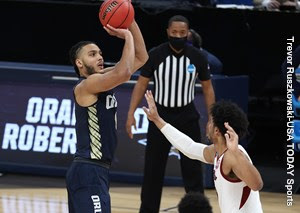 LUBBOCK, Texas – Texas Tech head coach Mark Adams has announced the signing of transfer Kevin Obanor to a financial aide agreement. Obanor played the last three seasons at Oral Roberts University where he scored 1,306 points, secured 684 rebounds and helped the Golden Eagles to the 2021 Sweet 16 with three double-doubles in the NCAA Tournament.

A Houston, Texas native, Obanor earned NABC All-District and All-Summit League first team honors as a redshirt junior last season where he averaged 18.7 points and 9.6 rebounds per game. Obanor led ORU in rebounding 24 times during the season and scored in double-figures in 27 of 28 games. He scored a career-high 39 points against Omaha in a game where he went 16-for-23 from the field and also had a career-high with an 18-rebound performance against North Dakota.

He played at Mount Zion Christian Academy where he also competed in football and cross country.

Obanor went through the NBA Draft process before electing to return to college and enter the transfer portal.