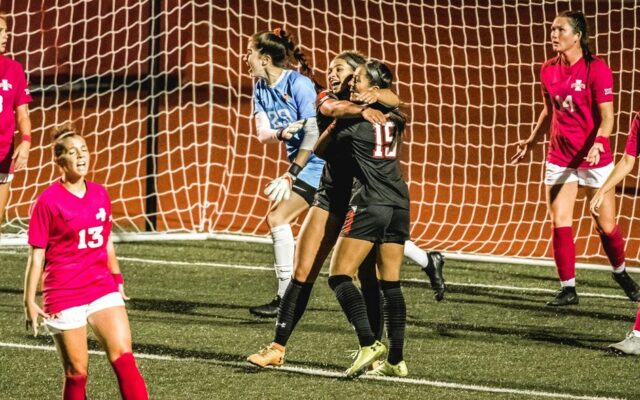 AMES, Iowa. – The Texas Tech soccer team (10-3-2, 3-2-1 Big 12) came back from behind to defeat Iowa State, 2-1, thanks to a goal in the 86th minute by sophomore Gisselle Kozarski, Thursday night at the Cyclone Sports Complex.

The score stood at 0-0 heading into halftime as both teams each registered six shots apiece with Tech holding a 4-3 shot on goal margin. Madison White walked into the half with two saves – one diving, to keep Iowa State off the board in the 13th minute. Tech collected another crucial save two minutes later as Macy Blackburn cleared away a ball right at the goal line to secure a team save.

Iowa State (4-8-0, 1-3-0 Big 12) struck first in the 49th minute to take the 1-0 lead after Mira Emma found the back of the net off a shot that initially ricocheted off the cross bar. Unfazed, TTU continued to create chances spearheaded by an attack which involved putting three forwards up top, instead of the initial two in the original formation. The persistency paid off in the 74th minute. Charlotte Teeter drove one from beyond midfield that found a sprinting Kirsten Davis on the left wing, who smashed it past the keepers’ raised gloves for the equalizer.

Tech continued to push numbers up top with its three forwards and 12 minutes later, Kozarski netted the game-winner. Maneuvering inside the six-yard box, the sophomore leaped and headed one to the net off a cross from Macy Blackburn. It was her second career goal and first of the season. Meanwhile, Blackburn registered her ninth assist of the season, which leads the team.

Despite TTU holding a narrow 14-12 shot advantage, the Red Raiders dominated the Cyclones in the shot on goal category, 11-4. Davis led the way with six shots (five on goal), while in goal, White finished with two saves.