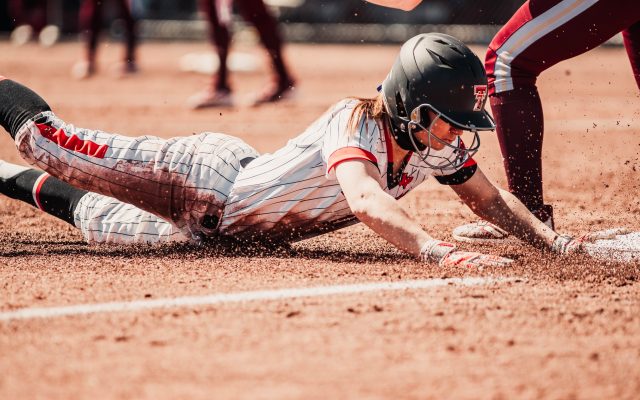 Missy Zoch (7-8) and Carrie Eberle (13-1) were engaged in a pitcher’s duel for the majority of the night, keeping the game in a scoreless tie for six innings before the Cowgirls found the winning run.

After a walk and an error on the Tech defense put two Cowgirls on base to start the game, Zoch forced a pop up, a ground out and struck out a batter to end the early OSU threat.

The Cowgirls would threaten again in the second, loading the bases with two outs before a lineout to right field ended the top half of the inning.

The Red Raiders went down in order in the first three innings, finally breaking up Eberle’s no-hit bid in the bottom of the fourth with a two out single from Karli Hamilton. Hamilton advanced into scoring position on the play as an errant throw from the short stop got past the OSU first baseman. The infield single would prove to be the only hit of the game for Tech after the next Red Raider struck out to end the fourth.

Zoch faced bases loaded with one out once again in the bottom of the fifth, but a clutch strikeout and a ground out to third kept the scoresheet spotless.

Tech tried to get things going in the bottom of the sixth when Zoe Jones reached on an error to lead off the inning. A walk from Peyton Blythe put two runners on with two outs for the Red Raiders but Tech was unable to push a run across leaving things knotted up at zero.

One swing of the bat was all the Cowgirls would need as Factor took the first pitch of the seventh inning out of the park with a solo shot to center field. Zoch retired the next three batters to keep it a one-run game with one last chance for the Tech offense.

The Red Raiders went down in order in the seventh as Eberle ended the game on her 11th strikeout of the night.

Eberle picked up her conference-leading 13th win of the season striking out 11 batters while giving up just one hit and one walk.

Zoch went the distance for Tech, giving up one run on four hits while striking out six and walking six.