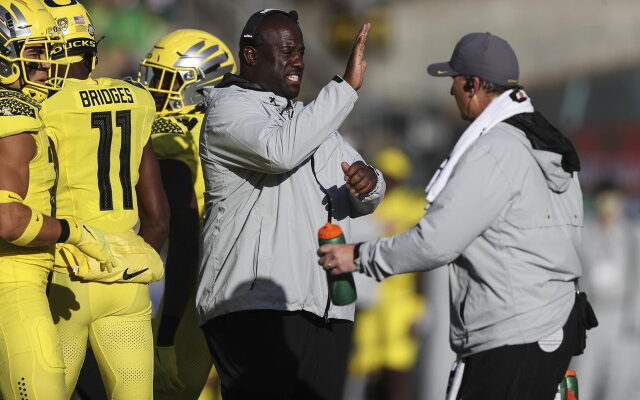 With the hire, Josh Bookbinder, who was previously announced as the secondary coach, will shift to overseeing the Red Raider linebackers. Yates, a former defensive coordinator at both Boise State and Arizona, arrives in Lubbock from Oregon where he was the secondary and passing game coordinator during the 2021 season.

“We’re excited about how this staff came together with Marcel being the final addition,” McGuire said. “He is one of the top developers of defensive backs across the country and will be a great resource for Coach (Tim) DeRuyter as we look to build one of the nation’s top defenses. We are thrilled to welcome Coach Yates and his family back to Texas and to our Red Raider family.”

Yates brings a strong understanding of the defensive scheme Tim DeRuyter will implement with the Red Raiders as the two have worked together each of the past two seasons at both Cal (2020) and Oregon (2021). Yates was the defensive backs coach at Cal for the 2020 season and then the passing game coordinator and secondary coach this past season with Oregon.

The Ducks boasted one of the nation’s most opportunistic defenses in the country this past season, especially in the secondary where Oregon recorded 17 interceptions. Oregon currently ranks fourth in the FBS for total interceptions and 18th nationally with 22 takeaways heading into its Valero Alamo Bowl appearance. The Ducks ended the regular season ranked 13th in the final College Football Playoff poll following an appearance in the Pac-12 title game.

Oregon’s success defending the passing game continued a trend from Yates’ season at Cal where the Golden Bears ranked 23rd nationally and second in the Pac-12 after allowing only 197.8 yards per game through the air. Cal closed that season by defeating Yates’ future employer with a 21-17 victory over No. 20 Oregon at home.

Yates accepted the position at Cal following four seasons as the defensive coordinator at Arizona where he worked with both the defensive backs and linebackers during various points during his tenure, including current Red Raider linebacker Colin Schooler. Schooler was a Freshman All-American and the Pac-12 Defensive Freshman of the Year under Yates in 2017 after racking up 13.5 tackles for loss, all in conference play, which was the most by an Arizona freshman since at least 1997.

Boise State won 87.6 percent of its games during Yates’ tenure, compiling a 127-18 record after winning at least 10 games in nine of his 11 seasons with two undefeated campaigns. The Broncos qualified for a bowl game in each of Yates’ 11 seasons on safe, while claiming eight conference championships (7 WAC, 1 Mountain West). Boise State wrapped both undefeated seasons with victories in the Fiesta Bowl, defeating No. 10 Oklahoma to wrap the 2006 campaign and then No. 4 TCU to end 2009.

Besides the slew of wins, Yates excelled in developing often overlooked prospects into successful college football players and eventual NFL selections. From 2007 to 2016 alone, seven of Yates’ defensive backs heard their name called during the NFL Draft with two more that signed free agent deals on their way to long professional careers. Of those seven draft picks, four were selected in the first three rounds, which was highlighted by cornerback Kyle Wilson in the first round in 2010.

During his two seasons at Texas A&M, the Aggies were among the best teams in the country, wrapping the 2012 campaign at No. 5 in the Associated Press and USA Today Coaches polls after winning 11 games for the first time since 1998. Texas A&M followed with a 9-4 campaign in 2013, concluding that season at No. 18 in each poll.

Yates began his coaching career as an assistant secondary coach at Montana State. In his second season, the Bobcats won their first Big Sky Conference title and earned their first trip to the NCAA Division I-AA playoffs in 18 years.

Yates was a four-year letterwinner as a defensive back at Boise State (1996-99), which coincided with the school’s first four years as a FBS program. His career culminated in the Broncos’ first-ever bowl appearance and bowl win over Louisville in the 1999 Crucial.com Humanitarian Bowl.

Yates earned a degree in social science from Boise State in 2000. He has a son, Eric, and a daughter, Kaybrie.