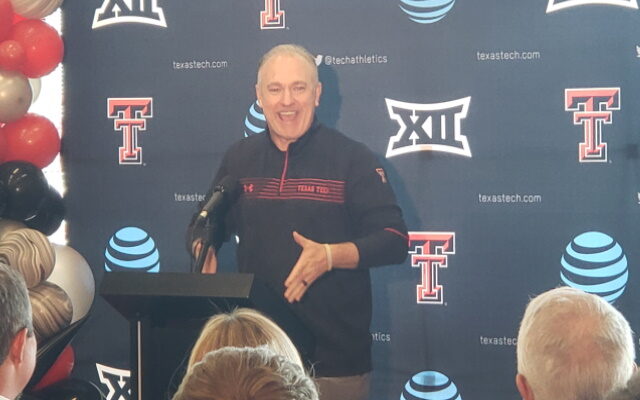 The three signees are the first to officially ink with the Red Raiders under McGuire heading into the start of the early signing period Wednesday. All three will have immediate eligibility as Boyd will be a sophomore, while Owens will be a junior and Moore will be a super senior for the 2022 football season.

“This is a great start to an exciting week for us as a program with these three guys choosing to be Red Raiders,” McGuire said. “We are fired up for the potential of this signing class, and we know it is only going to get better starting tomorrow. These three signees will all be instrumental in our future as a program, and we can’t wait to officially welcome them to campus in January.”

Below is a brief bio on each of the three transfer signees:

Boyd returns to the state of Texas where he was one of the top wide receiver prospects in the state of Texas for the 2021 signing class. Boyd, a native of Southlake in the DFW area, has appeared in nine games as a true freshman this season for Minnesota where he has caught two passes for 18 yards as a reserve wideout and a key contributor on special teams.

“First, we are thrilled Brady has decided to return to the state of Texas to become a Red Raider,” McGuire said. “Our relationship goes back to when he was only a small child, so I know the character and work ethic he will bring to this program on a daily basis. He will be a tremendous addition to our wide receiver room, and I’m excited to see his development under Coach (Emmett) Jones and our offensive staff.”

Boyd signed with the Gophers out of Southlake Carroll High School, one of the most storied programs in the state of Texas. A three-star prospect coming out of high school, Boyd helped push the Dragons to the Class 6A Division I state quarterfinals his junior season and then the state title game as a senior. He previously starred at Richland High School as a sophomore in 2018.

Boyd was one of the top receivers in the state as a senior after hauling in 70 receptions for 1,120 yard and 17 touchdowns en route to earning unanimous All-District 4-6A accolades. He previously totaled 66 catches for 969 yard and eight touchdowns as a junior and then 22 receptions for 505 yards and five touchdowns during his sophomore campaign.

Boyd was the No. 58 player in the state of Texas by Rivals prior to signing with Minnesota. He was listed as a top-100 wide receiver and a top-100 player in Texas by both Rivals and 247Sports as part of the 2021 class.

The signing of Moore reunites him with McGuire, who coached him over his final three seasons as the head coach at Cedar Hill High School. Moore recorded more than 200 career tackles and had 15 sacks during his Cedar Hill career before eventually signing with Vanderbilt as a senior in 2015.

Moore will have one season of eligibility remaining when he joins the Red Raiders for the 2022 campaign as he previously played three years at Vanderbilt and then this past season at Missouri State. He will be listed as a super senior who will utilize the extra year of eligibility granted for the 2020 COVID-shortened campaign.

“I’m excited to reunite with Dimitri and for him to join our Red Raider program,” McGuire said. “I have obviously known the Moore family a long time, and it’s been fun to watch Dimitri develop from our time together at Cedar Hill to being one of the best defensive players in the SEC. I’m fired up that he chose to end his collegiate career with us here at Texas Tech.”

Moore appeared in 31 games with 22 starts during his career Vanderbilt as he made 219 tackles from his linebacker position, including 84 as a redshirt freshman in 2018 and then 99 as a sophomore a year later. His 84 tackles as a redshirt freshman marked the most by any first-year SEC player that season, eventually earning him SEC All-Freshmen team accolades.

Moore ranked in the top-10 for total tackles among SEC defenders as a sophomore as he reached double digits five times, with four of those coming in league play. He added 1.5 sacks during his time in Nashville, while also chipping in six pass breakups and five quarterback hurries before transferring to Missouri State for the 2021 season.

As part of the final class to play for McGuire at Cedar Hill, Moore helped push the Longhorns to a 34-7 overall record during his three prep seasons, totaling 300 career tackles and 15 sacks during that span. He posted 90 tackles, including 61 solo stops, to go along with 12 sacks and 18 tackles for loss as a senior alone for a Cedar Hill program that was 11-3 overall after another playoff run.

Moore previously helped lead Cedar Hill to the Class 6A Division II title as only a sophomore in 2014, the third and final state crown for the Longhorns during McGuire’s storied run atop the program. He signed with Vanderbilt as a consensus three-star recruit as he garnered honorable mention All-State as well as first team All-Region honors his senior season.

Owens joins the Red Raiders from in-state rival Texas where he played in 27 games, while making one start in the secondary. He recorded 12 tackles during his two-plus seasons in Austin with the highlight likely being the blocked punt that was eventually returned for a touchdown in the Longhorns’ come-from-behind victory over the Red Raiders in 2020.

Owens, who will have two seasons of eligibility remaining, chose to sign with the Longhorns as one of the top recruits of the 2019 class, paving the way for him to appear in all 13 games as a true freshman. He made his lone start of his Texas career that season against TCU, totaling two tackles in the out. Owens was a significant contributor on special teams throughout his time at Texas.

“Tyler is one of the most athletic defensive backs to come out of this great state the past few years,” McGuire said. “I met Tyler initially in the recruiting process out of high school and was immediately impressed with his potential in the secondary. In addition to his success athletically, Tyler is a standout student and will immediately add to the culture within our football program.”

Prior to signing with the Longhorns, Owens was a five-star prospect out of Plano East High School in the Dallas-Fort Worth metroplex. He ranked as high as No. 76 among recruits nationally that year by 247Sports, which tabbed Owens as the No. 13 player in the state of Texas and the fifth-best safety in the country. He was among the top-50 players in the state and the top-25 safeties in the country by both Rivals and ESPN.

Owens wasn’t just a football standout, however, as he earned the silver medal at the UIL state track and field championships as a senior in 2019 after clocking a 10.38 in the 100-meter dash. Additionally, his speed was on display as part of a Plano East 4×200 relay team that set the school record at 1:25.71 his senior year. Owens was also an honor roll student at Plano East and a Big 12 Commissioner’s honor roll honoree at Texas.