No. 19 Red Raiders roll to Big 12 win over Cowboys 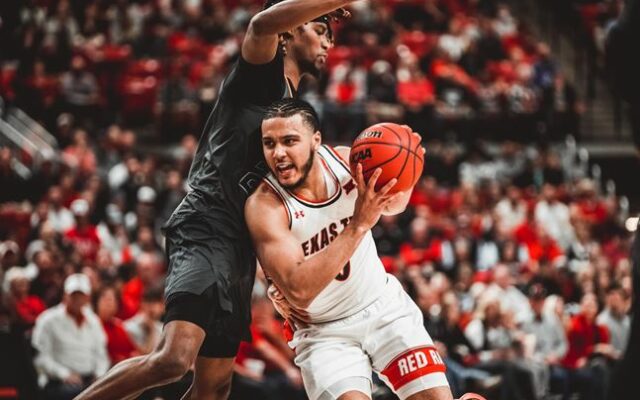 LUBBOCK, Texas – Marcus Santos-Silva recorded a double-double and Kevin Obanor scored 17 points as No. 19 Texas Tech extended its Big 12 winning streak to three with a 78-57 win over Oklahoma State on Thursday at the United Supermarkets Arena.

“I thought our guys played well,” Texas Tech coach Mark Adams said. “I told our guys after this game I am just as proud of this win as I was the other two and I mean that sincerely. This is a tough game. We played against some very good athletes and a team that’s well coached. For us to play the defense we did tonight, even on the offensive end I thought it was a heck of a game for us.”

Tech finished the game with five players scoring in double-figures led by Obanor who had 17 points by going 3-for-5 on 3-pointers.

“We had two wins and a lot of teams could be content,” Obanor said. “But we have a lot of mature guys on our team. A lot of seniors so we just knew that we weren’t satisfied. We just had the mentality of just taking it one game at a time and we came out victorious.”

Santos-Silva secured his first double-double of the season and the 13th of his career by going for 10 points and 10 rebounds, while Adonis Arms went for 13 points after going 3-for-6 on 3-pointers. Davion Warren added 12 points and Bryson Williams provided 11 points and six rebounds in a game where the Red Raiders shot 28-for-56 (50 percent) from the field with nine 3-pointers.

“Coach Adams before the game really explained it well about how the last two games we played and the feeling that we get in the locker room, celebrating with each other after we get a win,” Santos-Silva said. “He said ‘Keep on getting that feeling, keep on going for it.’ He always tells us to picture coming in off a loss and seeing how we would react and get ready by that, saying we don’t want to lose and we’re going go all out so that we can win.”

Kevin McCullar led Tech with four assists and also had seven rebounds and four assists in 29 minutes of play. McCullar missed the Big 12 openers against Iowa State and Kansas before returning to play at Baylor. For the second straight game he played as a reserve but was at 30 minutes of play. He finished the game 4-for-4 at the free-throw line. Santos-Silva had two double-doubles last season for the Red Raiders and just missed his first this season with 12 rebounds and nine points against Lamar. He now has 13 double-doubles in his career with 10 coming at VCU. Playing in his 142st career game, Santos-Silva now has 1,154 points and 870 rebounds in his career.

Arms and Obanor matched their season-high with their three 3-pointers with Obanor hitting three in a game for the fourth time and Arms the second. Tech’s nine 3-pointers matched a season-high that it also had in wins over Alabama State and Incarnate Word.

The Red Raiders finished the game with 13 assists on 28 made baskets and were 9-for-23 on 3-pointers. Tech forced 15 turnovers by the Cowboys with Clarence Nadolny leading the team with three steals and Obanor having two. In the paint, TTU outscored OSU by a 30-20 margin.

Tech led 42-27 at halftime with Arms leading the team with 13 points and Obanor having 11. The Red Raiders opened the game on a 10-0 run and closed out the first half on a 16-5 run that started with a pair of 3-pointers by Arms and ended with Wilson hitting layup. Arms and Obanor both had three 3-pointers for Tech which went 8-for-14 on 3-pointers in the half while OSU was 4-for-13. Williams and McCullar had seven points each, while Warren was leading the team with six assists. Tech finished the first half shooting 48.4 percent from the field while Oklahoma State was limited to just 32.0 percent by going 8 of 25. Keylan Boone and Moussa Cisse led the Cowboys with six points each.

The Red Raiders will complete a three-game week at Kansas State with an 11 a.m. contest on Saturday at the Bramlage Coliseum in Manhattan, Kansas. Tech has won four in a row and eight or 10 in the series over the Wildcats who are 0-4 in Big 12 play after a loss to TCU on Wednesday night at home. The Red Raiders will then host Iowa State at 8 p.m. on Tuesday at the United Supermarkets Arena.

Tech won the tip and scored on its opening possession with a McCullar 3-pointer to get the game started… Williams would throw down a dunk and hit a 3-pointer to push the lead to 8-0… An Arms alley oop dunk off a pass from McCullar gave Tech a 10-0 lead
Tech started the game on a 10-0 run before a pair of free throws by Anderson at the 16:10 mark
Obanor drilled Tech’s third and fourth 3-pointers of the half for a 16-6 lead… Tech started the game 4 of 6 on 3-pointers
Tech took a 19-8 lead with Arms hitting another 3-pointer with 11 minutes to play in the half
OSU went on an 10-0 run to cut Tech’s lead to 19-18 with a Thompson jumper cutting it to one… Arms ended the run with a jumper in the lane for the Red Raiders who led 21-18 with 7:35 until halftime
OSU tied the game for the first time at 21-21 with a Williams 3-pointer before an Obanor layup gave Tech the lead back
Arms hit back-to-back 3-pointers to give Tech a 29-22 lead with 4:33 to play until half… Arms had 13 points after the 3-pointers by starting 3 of 3 on 3-pointers
Obanor hit his third 3-pointer of the half to give Tech a 34-25 lead and give him 11 points
McCullar came away with a steal and hit two free throws to push a Tech run to 15-3 and the lead to 38-25 in response of OSU coming back to tie the game at 21

Tech took a 50-34 lead with Santos-Silva getting an offensive rebound and putback… Wilson found an opening to throw down a dunk to give Tech a 54-36 lead with 14 minutes to play
Obanor popped a midrange jumper to give Tech a 60-45 lead with 10:33 to play in the game… He had 17 points after the basket
Warren hit the first 3-pointer of the second half for Tech to push the lead to 67-48 with 5:30 remaining in the game
Santos-Silva got his double-double with a jumper that gave Tech a 71-52 lead with 3:43 to play
Warren went into double figures at 12 points with a jumper at the shot-clock buzzer and a free throw to give Tech a 78-57 lead