No. 19 Tech falls at Kansas State 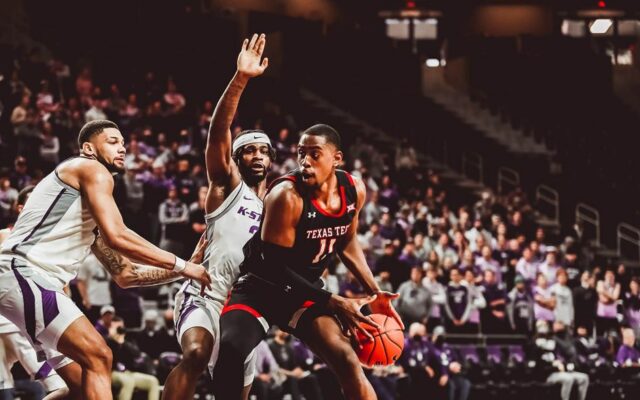 MANHATTAN, Kansas – No. 19 Texas Tech had its three-game winning streak end with a 62-51 loss at Kansas State on Saturday at the Bramlage Coliseum.

“We just needed to play and coach better,” Texas Tech coach Mark Adams said. “I thought we made some poor decisions late and had to play small ball. It really starts with how good K-State is. They have some excellent shooters and they played well. They are going to win a lot of home games and we were hoping that we could sneak out with a win. It just didn’t happen.”

Bryson Williams led the Red Raiders with 20 points on 9-for-15 shooting, while Davion Warren had nine points. Williams and Warren had two 3-pointers each in a game where Tech was just 4 of 17 on 3-pointers (23.5 percent). Terrence Shannon, Jr. returned to the court after missing the past seven with injury and had two points in 18 minutes of play.

“We knew coming in that it was going to be a fight,” Williams said. “It was a talented and well-coached K-State team. They play tough and were coming off a tough stretch. We knew we would have to come in and play with intensity against them. We were definitely fatigued with a lot of games in a short about of time, but this is a team with no excuses. We know every time we get on the court in the Big 12 that it is going to be a fight.”

Kevin Obanor and Kevin McCullar scored six points each and Adonis Arms led the team with seven rebounds. Tech finished the game shooting just 39.6 percent (19-for-48) and was 9 of 12 at the free-throw line. Clarence Nadolny had six points in the game, going 4-for-4 at the line and also having four rebounds.

Tech and Kansas State both had eight points leads in the first half but went to the break with the Red Raiders up 28-26 at halftime. Williams led Tech with nine points in the opening 20 minutes while Obanor had six and Warren had scored five. Arms was the top rebounder in the half, grabbing four and also scoring two points. Tech was shooting 45.8 percent from the field but was only 2-for-8 on 3-pointers. KSU shot 35.7 percent and was 4 of 12 on 3-pointers. McGuirl and Pack had seven points each for the Wildcats who were up eight just seven minutes into the game.

Texas Tech returns to action against Iowa State at 8 p.m. on Tuesday at the United Supermarkets Arena in the second game of the season series between the two programs. The Cyclones earned a 51-47 win over the Red Raiders on Jan. 8 in Ames, Iowa in a game where Tech was forced to play with only seven available players due to a combination of injuries and health and safety protocols. TTU is currently 10-0 on its home court this season.

KSU went on an 8-0 run to take a 34-31 lead early in the second half before a Warren 3-pointer tied the game… It was the second 3-pointer of the game for Warren with Tech at 3 of 10 from beyond the arc after his shot
Tech took a 36-35 lead off a Williams dunk from an assist from Nadolny… Williams had 13 points and was 6-for-9 form the field with the dunk
KSU took a 43-38 lead into the under-12 media timeout after a McGuirl 3-pointer and Smith jumper
Williams hit another 3-pointer to make it 43-41 and give him 18 points with 11 minutes to play before a Pack 3-pointer pushed KSU’s lead to 46-41… Another Williams basket gave him 20 points and cut the KSU lead to 46-43 going into the under-8 media timeout
Nadolny hit a pair of free throws to cut KSU’s lead to 48-45 with 6:18 to play… Tech was 7 of 10 at the free-throw line after the Nadolny free throws
Shannon made his first basket of the game to cut KSU’s lead to 50-49 with 4:50 remaining in the game
KSU took a 53-49 lead on a Smith 3-pointer with four minutes to play and a 55-49 advantage on a Miguel layup with 2:32 remaining
A Massound dunk off a Smith assist gave the Wildcats a 60-51 lead with 46 seconds to play… Tech had not made a basket since the Shannon shot with 4:50 on the clock.

Tech won the tip and scored on its opening possession with Warren hitting the second of two free throws for a 1-0 lead
KSU went on a 7-0 run to lead 11-3 before Warren made a free throw to stop the run with 11:54 on the clock… The Wildcats led 6-3 on a Miguel runner, was up 9-3 with a Nowell 3-pointer four minutes into the game and going into the first media timeout and took a nine-point lead on a McGuirl jumper
Williams hit a layup and then a 3-pointer to cut KSU’s lead to 11-9 before an Arms layup tied the game for the first time
Nadolny gave Tech its first lead of the game at 15-13 with a layup following a KSU missed shot before a Warren 3-pointer pushed the lead to 18-13 with 7:07 on the clock
Tech was on a 9-0 run and led 20-13 with Obanor fighting his way in for a layup… Obanor made another layup for a 26-18 lead with two minutes to play before Williams gave Tech its largest first-half lead at 28-20 with 1:22 remaining… KSU hit two 3-pointers in the final minute to make it a two-point game at the break