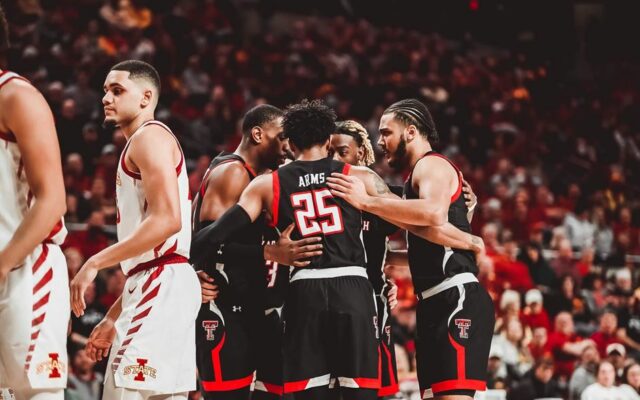 AMES, Iowa – No. 25 Texas Tech battled back from a 13-point deficit to take a 42-40 lead with two minutes remaining but were unable to hold on as No. 11 Iowa State earned a 51- 47 win on Wednesday at the Hilton Coliseum. The Red Raiders played their Big 12 opener with only seven active players due to injuries and health and safety protocols.

“I’m really proud of the way our guys came out and performed,” Texas Tech coach Mark Adams said. “Obviously we didn’t shoot the ball very well and missed key free throws, but the effort was outstanding. We felt like at halftime we couldn’t have played much worse and we still felt like we could win the game. We fought until the very end. This is something we can build.”

The Red Raiders (10-3, 0-1 Big 12) trailed 30-19 at halftime before fighting back to 30-26 by holding the Cyclones (13-1, 1-1 Big 12) scoreless until a pair of free throws seven and a half minutes into the second half. Tech tied the game at 40-40 on a layup by Davion Warren and took its first lead of the game with a Marcus Santos-Silva dunk with 2:18 to play. ISU responded on the other end though with Izaiah Brockington hitting a 3-pointer and a free throw to retake the lead and went on a 7-0 run to take back control.

Warren led the Red Raiders with 12 points and also had two assists, while Bryson Williams added 10 points and three rebounds. Kevin Obanor grabbed a season-high 10 rebounds and Adonis Arms had eight rebounds, four steals and seven points. Clarence Nadolny made his first start of his career, finishing the game with nine points, four steals and three assists while Santos-Silva had five rebounds, three assists and scored four points. KJ Allen added two points as all seven players who were available to play scored and had at least one rebound in the game.

The Red Raiders fell to 11-15 in Big 12 openers and had a five-game winning streak against Iowa State snapped with the loss. Tech is now 1-2 against ranked opponents this season with a win over No. 13 Tennessee and a loss to No. 5 Gonzaga and also fell to 0-2 in true road games.

Shorthanded due to injuries and health and safety protocols, the Red Raiders finished the game shooting 19-for-49 (38.8 percent) from the field and were only 3-for-17 on 3-pointers. At the free-throw line, Tech also struggled going 6 of 15 in a game where it also committed 15 turnovers. The Cyclones were stifled offensively throughout the game by Tech which held ISU to 15 of 49 (30.8 percent) from the field and 7-for-25 on 3-pointers. The Cyclones were 1 of 9 on 3-pointers in the second half and the Red Raiders forced 18 turnovers with eight steals. Warren has now led Tech in scoring in back-to-back games for the first time this season after leading the team with 15 in the win over Alabama State last Tuesday. Obanor’s 10 rebounds is his most this season but below his career-high of 18 in a game against North Dakota last season while playing at Oral Robert.

Along with five players who were unable to travel due to health and safety protocols, Tech played without Terrence Shannon, Jr., Kevin McCullar and Mylik Wilson due to injury.

Brockington led ISU with 14 points and nine rebounds, while Aljaz Kunc added 13 points. Caleb Grill and Kunc had two 3-pointers each and Gabe Kalscheur finished the game with nine points after going just 1 of 6 on 3-pointers.

Texas Tech trailed 30-19 at halftime with the Cyclones hitting six 3-pointers and the Red Raiders going 0-for-6 from beyond the arc. It was only the second time Tech trailed at halftime this season. Nadolny led Tech with five points by going 2-for-4 from the field and Obanor had six rebounds in the opening half. Williams and Arms had four points each at the break, while Warren, Santos-Silva and Allen had two each. Arms had four rebounds to go along with his four points. Tech went into the break down 11 after shooting 9-for-23 from the field, while ISU was at 12-for-30 but with six 3-pointers going down. Brockington, Grill and Kunc each had six points to lead the Cyclones. Kunc hit his second 3-pointer with seven seconds remaining in the half to give ISU the double-digit lead going to the break.

KEY MOMENTS
Second Half
Warren hit Tech’s first 3-pointer of the game to cut the score to 30-22 before a Nadolny layup made it a six-point game… Tech had started the game 0 of 8 on 3-pointers
Iowa State scored for the first time in the second half with two free throws from Grill to make it 32-26 with 12:37 to play
Williams drilled a 3-pointer off an assist from Nadolny to make it 34-30 with 8:08 on the clock… Williams had nine points after the shot with Tech at 2-for-13 on 3-pointers
Warren hit a pair of free throws to cut ISU’s lead to 38-35 with five minutes remaining… Warren had eight points with the free throws
Obanor threw down a dunk to get Tech to within two at 40-38 with 3:21 on the clock… It was Obanor’s first basket of the game and gave him three points to go along with 10 rebound with just over three minutes to play
Warren tied the game at 40-40 on a cut to the basket with an assist from Santos-Silva (2:55) before Santos-Silva gave the Red Raiders their first lead of the game at 42-40 on a fastbreak dunk… ISU’s Brockington would give ISU the lead back with a 4-point play on the other end
ISU went on a 7-0 run before a dunk by Warren made it 47-44 with 31 seconds remaining
First Half
Nadolny and Santos-Silva had a pair of dunks for the first two Tech baskets to take the game to 4-4… ISU went on a 5-0 run to lead 9-4 at the first media timeout
Arms hit a layup to stop an 11-0 run by the Cyclones… Tech was down 15-6 with 13 minutes remaining until halftime after the basket
Warren hit a runner coming out of the second media timeout to cut it to 19-10
Allen threw down a dunk and Williams hit a tough inside shot to cut Iowa State’s lead to 22-15 with six minutes to play in the half

UP NEXT: Tech returns to action at 3 p.m. on Saturday against No. 6 Kansas at the United Supermarkets Arena. The Jayhawks (12-1, 1-0 Big 12) are coming off a 74-63 road win over Oklahoma State on Tuesday in Stillwater to extend an eight-game winning streak. KU has won four in a row over the Red Raiders coming into the matchup.