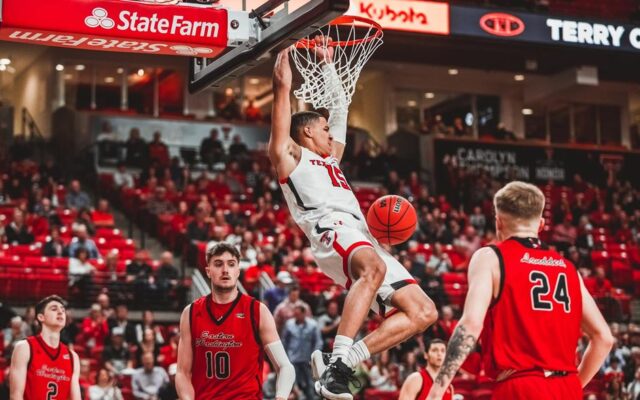 LUBBOCK, Texas – No. 25 Texas Tech rolled to a 78-46 non-conference win over Eastern Washington on Wednesday with four Red Raiders scoring in double figures, the team shooting 59.2 percent from the field and defensively limiting the Eagles to just 26.4 percent at the United Supermarkets Arena.

Tech (9-2) led 50-27 at halftime, extended their winning streak in non-conference home games to 13, improved to 7-0 at home this season and now has a 19.9 scoring margin advantage over its opponents through 11 games which ranks 11th nationally. The Eagles fell to 6-6 with the loss where they shot 8-for-35 on 3-pointers and were outscored 40-4 in the paint.

“I’m very pleased about the way we played,” Texas Tech head coach Mark Adams said. “I thought this was one of our best games from start to finish. We had 17 assists, we did a great job on defense, guarded the three-point line and I thought our guys just played together. It was the best team effort.”

Bryson Williams and Adonis Arms led the Red Raiders with 12 points each, while Kevin Obanor approached a double-double 11 points and seven rebounds to go along with a career-high four assists. Kevin McCullar led Tech with five assists and scored 10 points to give the Red Raiders four players in double figures in the game where the team finished with 17 assists on 29 made baskets. Williams, Obanor and McCullar each had two 3-pointers while Arms was 5 of 6 from the field from the starting lineup and Marcus Santos-Silva led the reserves with eight points on 4-for-4 shooting.

Texas Tech played without Mylik Wilson and Terrence Shannon, Jr. for the second straight game due to injury.

The 26.4 shooting percentage was a season-best defensively for the Red Raiders who also held Omaha and Tennessee under 30 percent shooting this season. Tech also forced 14 turnovers and had three blocks with Williams, Daniel Batcho and KJ Allen having one each. The Red Raiders scored 19 points off turnovers in the 32-point win where they limited EWU to just 6 of 29 (20.7 percent) shooting in the second half.

“We know that when we start getting turnovers and when we start getting transition baskets, it makes it hard for other teams,” Williams said. “We see the other teams struggling to get into their offense or struggling to get it going. We know that we are doing a good job and everyone is staying active. Everyone is in the spot they need to be at the right time. It’s really exciting. That’s what Texas Tech is built on. It’s all about defense. That’s what gets us hyped the most.”

Clarence Nadolny added a career-high three assists and four points, while Batcho had five points and four rebounds. Tech owned a 36-24 rebounding advantage and finished the game 12 of 17 at the free-throw line.

Obanor and Arms led Tech with 10 points each at halftime with the team shooting 70.8 percent from the field and hitting 6 of 11 shots from beyond the arc. Obanor also added six rebounds and was 2-for-3 on 3-pointers going into the break. Williams and McCullar had seven points each, while Warren and Batcho had five each. Tech was also 10-for-12 from the free-throw line to go along with the hot shooting performance. Acliese led EWU with nine points and Allegri had eight points with two 3-pointers. EWU finished the opening half shooting 5 of 17 on 3-pointers (29.4 percent). Tech has now led at halftime in 10 of 11 games, only trailing in its loss to Gonzaga and has scored 50 or more in three opening halves – scoring 52 in the win over Lamar for its season high.

KEY MOMENTS
First Half
EWU won the tipoff and scored on its first possession with Venters hitting a 3-pointer on a second-chance opportunity… Williams responded on the other end with a 3-pointer of his own to make it 3-3 with both teams scoring on their first touches
Tech scored on its first four possessions and led 9-3 after a McCullar dunk for a 9-0 run before another EWU 3-pointer… An Obanor 3-pointer gave Tech a 12-8 lead going into the first media timeout of the game with the Red Raiders shooting 5 of 6 from the field and 2 of 3 on 3-pointer through the opening five minutes
EWU took a 13-12 lead with Allegri hitting a 3-pointer before Arms responded on the other end with a Tech 3-pointer for a 15-13 lead with 14:33 remaining in the first half
Tech went on a 10-0 run when McCullar gave Tech a 22-16 with the team’s fourth 3-pointer of the half off an assist from Obanor who pushed the lead to 24-16 with a pair of free throws on the next possession… Nadolny knocked down three free throws after being hit while shooting a three for a 27-16 lead with 9 minutes on the clock
Tech went on another big run, this time a 12-0 run starting with Obanor hitting his second 3-pointer and had 10 points with a three (1H, 4:54) to give Tech a 37-25 lead going into the final media timeout of the first half… The lead was at 46-25 after a pair of McCullar free throws, a Santos-Silva fastbreak dunk and Batcho putback before EWU hit free throws to stop the run at 12
Second Half
Tech scored its first point of the second half with Obanor hitting a technical free throw at the 15:49 mark of the half… Santos-Silva made the first basket of the half with 14:57 on the clock off an assist from McCullar for a 53-29 lead
Tech led 63-36 going into the under-12 timeout after pair of 3-pointers from Williams and McCullar… Arms pushed the lead to 65-36 with a layup
Tech went on an 13-0 / 18-2 run to take a 71-36 lead… Arms made a layup to push Tech to a 7-0 run and a 65-36 lead with 7:21 remaining in the game… Warren capped the run with a layup with 5:30 to play in the game

UP NEXT: Texas Tech returns to action against Alabama State at 1 p.m. on Tuesday, Dec. 28 before hosting Oklahoma State at 3 p.m. on Jan. 1, 2022 to begin Big 12 play at the United Supermarkets Arena.