No. 5 Tech triumphs over Oklahoma on Senior Day 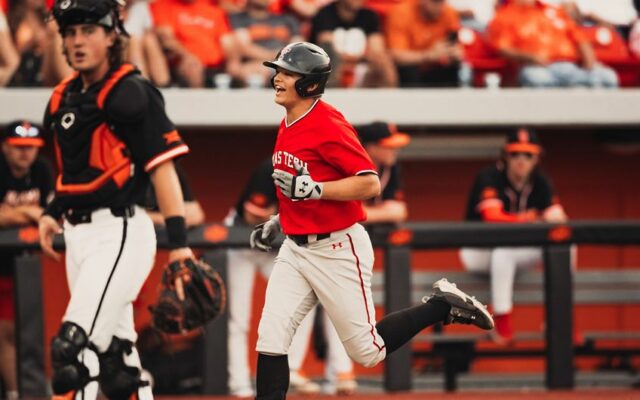 LUBBOCK, Texas – The No. 5 Texas Tech baseball team’s senior class was sent off the right way on Saturday, handing Oklahoma a 10-2 defeat at Rip Griffin Park on Senior Day in the Big 12 regular-season finale. The Red Raiders finished the regular season 36-18, 15-9 in Big 12 play and earned a 2-seed in the Big 12 tournament which begins Wednesday, May 25. Tech will face the 7-seed Kansas State at 4 p.m.

Seniors Easton Murrell, Kurt Wilson, and Parker Kelly each had standout days on their big day. Murrell finished 2-for-3, Wilson 2-for-5 and Kelly 2-for-3. All three owned multi-base hits as Wilson and Kelly homered while Murrell and Kelly both doubled.

While the Red Raiders’ offense had a terrific day, Chase Hampton set the stage for the win. In his 11th start of the season, Hampton worked six innings and struck out nine while walking just one. The sophomore right-hander set a career-high for strikeouts last time out with nine and matched that total in back-to-back starts.

The pitching trio of Hampton and relievers Mason Molina and Austin Becker held the Sooners scoreless for the remainder of the game after the two runs in the first. Molina worked two scoreless innings in the sixth and seventh while Becker closed it out in the eighth.

In the first inning, six Red Raiders reached base, Ty Coleman registered the first RBI (watch) knocking home Murrell who reached on a leadoff walk to cut the early deficit in half, 2-1. With the bases loaded, Hudson White connected for a single (watch) allowing two runs to score, and Kelly doubled (watch) next in line to score two more to give Tech a 5-2 lead after the first inning.

The Red Raiders scored three more runs in the fourth inning spearheaded by Jace Jung’s 13th home run (watch) of the season to widen the lead to 8-2. It was a two-run shot after Cole Stilwell hit a sacrifice fly to bring home Dillon Carter.

Quotable
Head Coach Tim Tadlock
On this year’s seniors…
“Those guys have been really good players, they’re going to continue to be really good players. I’m awfully proud of them. Don’t kid yourself, if you think about it, you go up to the plate today and think to yourself that this could be your last at-bat in this ballpark. Pretty neat. These guys have been here a while. You think of 2020, you’ve got Cody Masters, Parker Kelly, Kurt Wilson and it giving them an extra year, these guys have been around a while. They’ve played with some really good baseball players and played on some really good teams. They have definitely seen firsthand what it is supposed to look like. These guys are the ones that can impact you on and off the field. That’s probably one of the best compliments you can give them, they’re just great teammates.”

On today’s game…
“Today’s win was big, you never want to get swept. When you line up to play, you play to win. Baseball is an interesting game. Sometimes the more you focus on that, the harder it is. You’ve really got to stick to simpler thoughts and pitch to pitch and really have good awareness and be in the moment. I think Oklahoma really helped us with that. I think good teams make good teams better.”

Up Next
The Red Raiders earned a 2-seed in the Big 12 tournament which begins Wednesday, May 25. Tech will face the 7-seed Kansas State at 4 p.m.