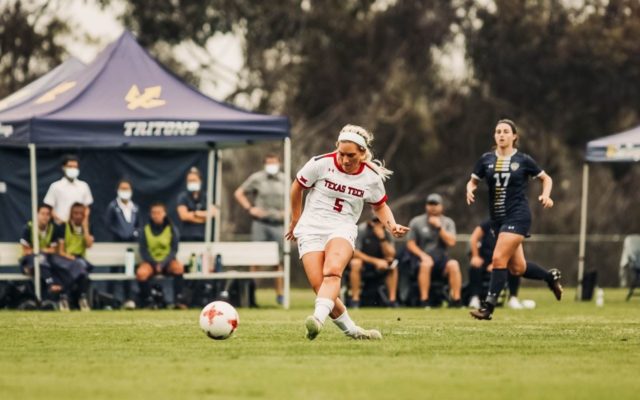 A JOLLA, California – Texas Tech and UC San Diego played to a 1-1 draw on Sunday at the Triton Soccer Stadium with both teams recording their goals within five minutes of each other midway through the second half. Macy Schultz scored the Red Raider goal with an unassisted equalizer in the 71st minute of play to tie the game at 1-1 after Kennedy Carter had opened scoring with a goal in the 65th minute for the Tritons (0-1-1).

“We are disappointed to draw out here,” Texas Tech head coach Tom Stone said. “I thought UC San Diego played well and deserve full credit. They earned the draw. They played hard and had a good game plan. There were some positives within our game. I thought Cassie Hiatt and some of our younger players were outstanding, but we just did not get a complete performance from top to bottom. You don’t want to walk out of here in the second game of the season after outshooting a team 22-6 and not get the win. It’s soccer, so we get that it happens, but the disappointment is in our execution on the offensive end of the field.”

Texas Tech (1-0-1) will now begin a four-game home stand starting at 7 p.m. on Thursday against Hartford before hosting Abilene Christian next Sunday to get it going at the Walker Soccer Complex.

A junior from Colorado, Schultz scored her first goal of the season and the seventh of her career. Schultz had two shots on goal along with senior Kirsten Davis who led Texas Tech with seven overall shots. Davis scored Tech’s lone goal in the 1-0 win over UTEP in the season opener last Thursday in Lubbock and now has six shots on goal through two games.

Texas Tech finished the game with eight shots on goal and limited UCSD to only three, while also owning a 22-6 total shot advantage in the 110 minutes of play on Sunday afternoon. The Red Raiders had two shots on goal in the second overtime, first by Hannah Anderson in the 103rd minute and then again with Charlotte Teeter putting a shot on UCSD goalkeeper Grace Taylor in the 108th minute. Taylor made both saves and finished the game with seven.

Madison White recorded two saves, including one in the second overtime for the Red Raiders. White, who has played all 200 minutes in goal this season, made her final save in the 101st minute off a shot by Carter in the first minute of the second session. Carter had all three shots on goal for the Tritons who were coming off a 3-0 loss to Cal on Thursday to start their season.

Five Red Raiders played all 110 minutes with Teeter, Anderson, Cassie Hiatt and Davis staying on the field throughout the game along with White in goal. Macy Blackburn played 107 minutes and finished the game with one shot.

“We just had too many chances not to put them away,” Stone said. “We’ll get back to work right away. We have the players who can score, we just want to get them comfortable and build up their confidence. They’re not real happy right now either so the whole team will be moving on quickly when we get back to Lubbock so we can have a good performance on Thursday.”