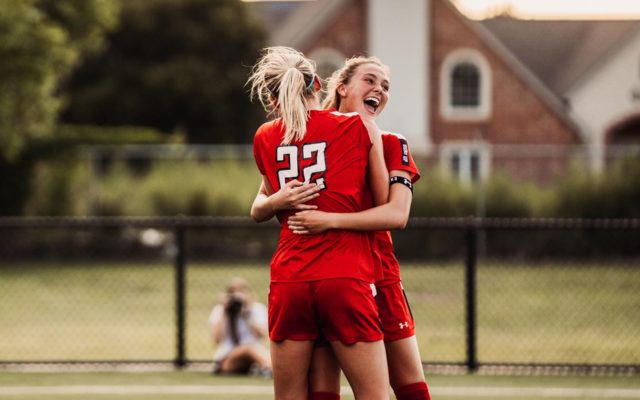 LUBBOCK, Texas – Kirsten Davis scored a goal and the defense didn’t allow a single shot as Texas Tech opened its season with a 1-0 win over UTEP on Thursday at the John Walker Soccer Complex.

Davis provided the only goal of the game off an assist from Macy Blackburn in the first half for the Red Raiders who dominated shots with a 12-0 advantage over the Miners. Tech improved to 18-9-1 all-time in season-openers and will now play at UC San Diego at 1 p.m. (CST) on Sunday in La Jolla, California.

Hey @BlackburnMacy, how are you feeling about your first career assist? pic.twitter.com/sDFUXYVFpX

“It was a good win, but we feel like we left some goals on the table,” Texas Tech coach Tom Stone said. “There were some disappointing moments within the victory that we’ll acknowledge and go back to work so that we can be better the next time. We closed the game out and didn’t allow a shot.”

The Red Raiders scored season with a 37th minute goal from Davis off an assist from Blackburn. The goal was the 32nd of Davis’ career and broke a defensive first half were the Red Raiders finished with five shots, while not allowing a single shot by UTEP. Davis had all three shots on goal in the opening 45 minutes of play and Shultz had one shot.

A senior who returned to play for a fifth season after getting selected in the NWSL College Draft, Davis finished the game with four shots on goal and five total shots to lead the Red Raiders. She now has four goals in season openers after scoring two in the 2019 season opener at San Diego State. Macy Schultz finished the game with two shots, while Jordie Harr, Hannah Anderson, Blackburn, Jen Rose and Gisselle Kozarski had one each.

Madison White earned the shutout where she played all 90 minutes in a lonely goal, not facing a single shot behind a strong defensive effort.

The Red Raiders will return from California to begin a four-game home stand, starting next Thursday against Hartford at 7 p.m. at the Walker Soccer Complex. Tech will also host Abilene Christian (Aug. 29), Cal State Fullerton (Sept. 2) and UTSA (Sept. 5) during the stretch of home games.