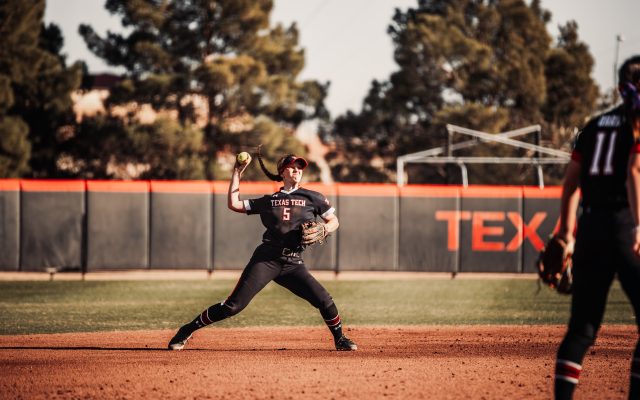 Baylor defeated Texas Tech 5-2 in game one of the three-game series.

Both of the Red Raider runs came via the long ball, with solo shots from Yvonne Whaley and Kelcy Leach. Four of the Bears’ five runs came in the third inning.

In the first Red Raider at-bat of the game, Whaley took a 1-2 pitch to deep right center for her first collegiate home run to give Tech the 1-0 lead.

After a scoreless second, Baylor opened the third inning with a single down the right field line. A one-out walk and a single to right loaded the bases for Goose McGlaun who singled up the middle to tie the game. Zadie LaValley then doubled to left center to score two and give Baylor the 3-1 lead, ending Missy Zoch’s day in the circle. With Erin Edmoundson in the game in relief, Aliyah Binford hit a sac fly to left to score one more run before the next batter was retired.

The Red Raiders cut the lead in half to 4-2 on a solo home run from Leach to lead off the bottom of the fifth. The shot to left center was Leach’s second home run of the season.

Baylor got the run back in the top of the sixth after stringing together a couple of singles to make it 5-2.

Ellie Bailey drew a walk to open the Red Raider half of the sixth, but Tech failed to push any runs across in the inning.

Binford retired the Red Raiders in order in the seventh to give the Bears the series opening win.

Zoch (7-4) picked up her fourth loss of the season going 2.1 innings with a pair of strikeouts while giving up four runs. Edmoundson went 4.2 innings in relief giving up one run while striking out two batters.

After recording just 10 home runs through the first 20 games of the season Tech has hit 11 in the past seven games to bring its season total up to 21. Eleven different Red Raiders have contributed to the home run total this season.

Game two of the series is set for 4 p.m. on Saturday at Rocky Johnson Field. The Red Raiders look to even things up and force a rubber match on Sunday at noon.