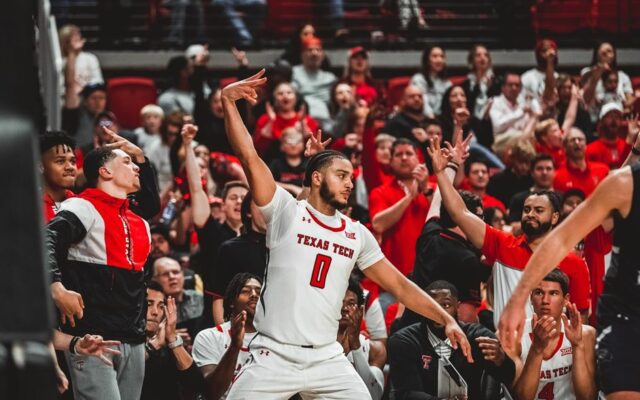 The Red Raiders have now won 22 straight season-openers and are 70-27 all-time in the first game of a season. Adams, who was hired as the 18th head coach in program history on April 6, begins his tenure leading the team with a win that came in front of 14,245 fans. Texas Tech started the game on a 9-0 run, led 50-36 at halftime and finished the game shooting 51.5 percent from the field.

“I’ll start by saying the Raider Riot, our student section, season ticket holders and overall Red Raider Nation were just outstanding,” Adams said. “We talked about it all last year, we talked to our recruits about it and they didn’t let us down. Our guys embraced it and I think they might have played a little better because of it. I was pleased with our poise on offense. I thought we were patient when we needed to be but liked the tempo, how we were pushing the ball down the floor. We shared the ball well and scored in a lot of different ways, which is encouraging.”

Texas Tech returns to action by hosting Grambling at 7 p.m. on Friday and Prairie View A&M at 7 p.m. next Monday to complete a three-game home stand at the USA. Grambling is 0-1 on the season after falling 74-53 to Grand Canyon on Tuesday night in Arizona.

Kevin Obanor added 17 points and six rebounds in what was also his debut for the Red Raiders after transferring from Oral Roberts and Davion Warren and Marcus Santos-Silva also scored in double-figures.

“I feel like we have room to grow, but we have a very versatile group with Davion who was one of the leading scorers last year,” Obanor said. “We have a lot of talent in the group. And the main point is to not be selfish and we are still gelling as we have a long way to go and the best is yet to come.”

Williams finished the game shooting 9-for-11 from the field with one 3-pointer in his 22-point performance in his first game at Tech. He transferred from UTEP over the summer and also added a block and a steal in his debut.

“It was amazing being out there and playing for Red Raider Nation,” Williams said. “Just being able to experience the crowd and the environment from the jump was great. I have never seen anything like that and just being able to go out there an compete hard. It definitely was really good. I mean they made a big emphasis on trying to go inside and I mean the guys trusted me to be able to go in there and finish my teammates just kept looking for me and I just had it going on tonight so just kept rolling”

“You can see why they were recruited by everyone,” said Adams of Williams and Obanor. “When you see Kevin Obanor shoot a three, we think it’s going to go in. We see it every day in practice. Bryson is a great scorer, you saw him hit a three, but he’s also great around the basket. They’re two great offensive players and we are thrilled to have them.”

Mylik Wilson led the team with seven assists in a game where the Red Raiders had 20 assists on 35 made baskets. Warren and Kevin McCullar added five assists each and Adonis Arms had two more. Wilson was one assist shy of his career-high of eight against Coastal Carolina in 2020 when he was playing at Louisiana. McCullar’s five assists were a new career-high.

Texas Tech has now started a season with 22 straight wins and improved to 70-27 all-time. TTU is 11-7 in season-openers under a first-year head coach with the win.

Texas Tech led 50-36 at halftime with Williams leading the team with 12 points and six rebounds. The Red Raiders jumped out to a 9-0 lead and would lead by their largest margin of the half at 14 with a pair of Santos-Silva left-handed hook shots to end the half. TTU had a 25-9 rebounding advantage and 10 assists at the break. Obanor added 10 points and five rebounds with back-to-back 3-pointers for a 28-17 lead with nine minutes remaining in the half. Warren had eight points, two assists and two steals in the opening half and Santos-Silva added nine points. Wilson and McCullar led the Red Raiders with three assists. McCullar had seven points and four rebounds in the half, while Williams was 4-for-4 from the field and 3-for-3 at the line in the opening 20 minutes for the Red Raiders who shot 19-for-36 from the field (52.8 percent). Obanor went 2-for-4 on 3-pointers in the half where TTU was 3-for-10 from beyond the arc, while UNF was 5-for-13 on 3-pointers.

Placer led UNF with 11 points in the opening half after going 5-for-8 from the field, while Hendrickson added eight points with two 3-pointers. UNF was 12-foe-27 from the field.

Texas Tech scored on its opening possession by winning the tip and then seeing Bryson make a layup and then a free throw to start the game.
TTU begin with a 9-0 run to start the game with points from Williams, Obanor, Wilson and Santos-Silva
Obanor hit two straight 3-pointers for a 28-17 lead with 9:02 remaining in first half
A McCullar layup pushed it back to double-figures at 35-25
Warren had eight points and gave TTU a 40-32 lead with a layup with 4:07 to play in the half
McCullar pushes to 42-32 with another inside basket
Santos-Silva gave TTU its biggest lead of the half at 50-36 with two left-handed hooks in the final minute of the half
Williams got to 22 points and gave Tech a 60-40 lead three minutes into the second half
UNF went on a 9-0 run to make it 60-49 before Agbo got an offensive rebound and putback
Calhoun steal leads to MSS layup and 6-0 run for 72-55 lead
Obanor hit his third 3-pointer of the game for an 83-61 lead
K.J. Allen’s first basket as a Red Raider gave Tech an 87-61 lead (11-0 run)
UNF finished the game on a 9-0 run to trim its deficit to 15