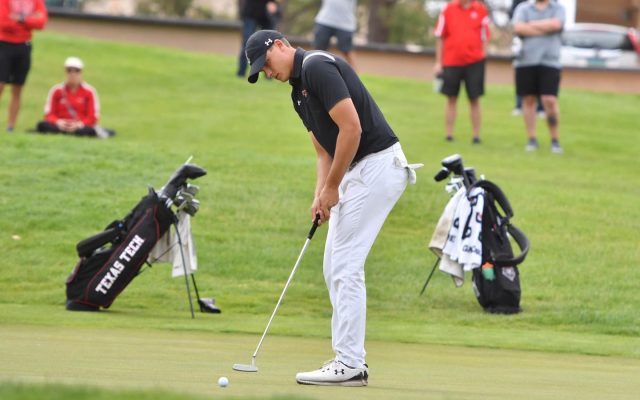 ALBUQUERQUE, New Mexico – Texas Tech is in second place at 15-under-par at the NCAA Albuquerque Regional after shooting 10-under on Tuesday at the UNM Championship Course. Ludvig Aberg led the Red Raiders on the second day of the tournament with a 3-under, 69 that included making birdie on four of his final five holes.

Tech (283-278 – 561) is behind Oregon State which leads the tournament at 20-under (281-275 – 556) but is in strong position to advance with Arizona State (-12), South Carolina (-8) and Texas A&M (-8) in the top-5 going into Wednesday’s final round. Throughout the country there are currently six, 54-hole regional tournaments being played with the top five teams and the top individual not on one of those teams advancing to the DI Men’s Golf Championship. Each regional is scheduled to be completed on Wednesday. Team and individual medalist titles will be decided May 28-June 2 at Grayhawk Golf Club in Scottsdale, Arizona.

Teams outside the top-5 in Albuquerque include Stanford and New Mexico which are both at 5-under while No. 1-ranked Oklahoma is at 1-under.

Aberg, who is No. 5 in the World Amateur Golf Ranking and was a Ben Hogan Award semifinalist, is just four strokes back of Oregon State’s Spencer Tibbits who leads the tournament at 9-under after shooting a 66 on Tuesday. Aberg was 1-over for his round on Tuesday after a bogey on No. 13, but dramatically turned his day around with birdie on No. 14, 16, 17 and 18. He goes into the final round having made 12 birdies through 36 holes.

Skogen opened his second round by making eagle on the par 5, 544-yard No. 1 hole on the course and would make three birdies on the day. He finished the round by making birdie on No. 18 (par 5, 544-yards) to move to 5-under on the four par 5 holes on the day. Martin, who was coming off an even-par round on Monday, would shoot 2-under, 70 on Tuesday with four birdies and two bogeys. He birdied No. 14 before finishing his day with four straight pars. Hogan followed his round of 2-under on Monday by shooting even-par on Tuesday with four birdies, two bogeys and a double on his second-round scorecard. Hogan, who is the only Red Raider with regional experience, birdied his first two holes on Tuesday and would make par on his final five to carry a total of 2-under into the final round. Lopez responded from a 75 on Monday by carding his 3-under, 69 on Tuesday with seven birdies. A senior from Plano, Lopez birdied his first hole of the day and completed his round with birdies on No. 17 and 18. He finished the round with seven birdies.

The Red Raiders opened the round on fire with Skogen making an eagle on No. 1 and birdies from Aberg, Hogan, Martin and Lopez on the first hole of the day. Tech finished the round at 10-under (278) after starting the tournament with a 283 on Monday.

The Red Raiders are looking to advance to the program’s 13th NCAA Championship appearance with the most recent coming in 2018 where they finished as quarterfinalist in Stillwater, Oklahoma. Sands, who has led the team to 19 straight regional appearances, has guided the program to eight since 2002.