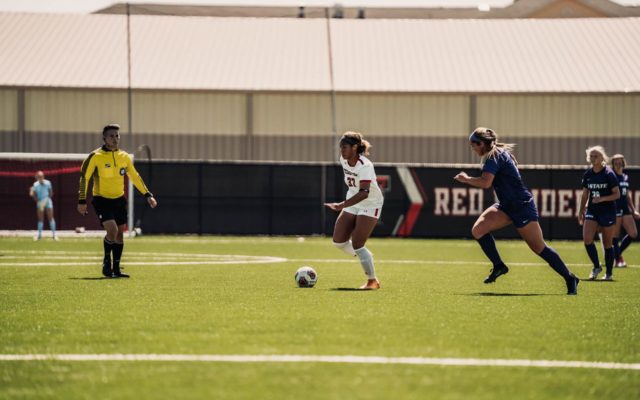 Kirsten Davis wasted no time getting TTU on the board with her 10th goal of the season and fourth in the last two games in the sixth minute. Defender Cassie Taylor cleared a header just past midfield where Davis took care of the rest, taking her defender one-on-one for a right-footed strike to the bottom left of the net. It’s her 41st career goal, putting her in a tie for second all time in the Red Raider record book (Kristy Frantz, 1996-99).

Ashleigh Williams made it a 2-0 contest with a strike to the bottom-left of the net from 18 yards out. The freshman corralled a deflection, made a few moves to her right before striking her right-footed shot past the outstretched hands of the K-State keeper in the 35th minute.

At the break, Tech held a 7-2 shot margin as keeper Madison White secured one save.

In the second half, K-State won the shot battle (11-9) but White kept the Wildcats off the board snagging four saves. Her five total saves tied a season-best mark as she secured that same amount a few weeks ago against Arizona. The clean sheet also gives her seven on the season, which is a new career-high (six, 2019-20).

Tech hits the road to play Baylor on Thursday, Sept. 30 at 7 p.m. before heading to Austin to face the Longhorns on Sunday, Oct. 3 at 1 p.m.