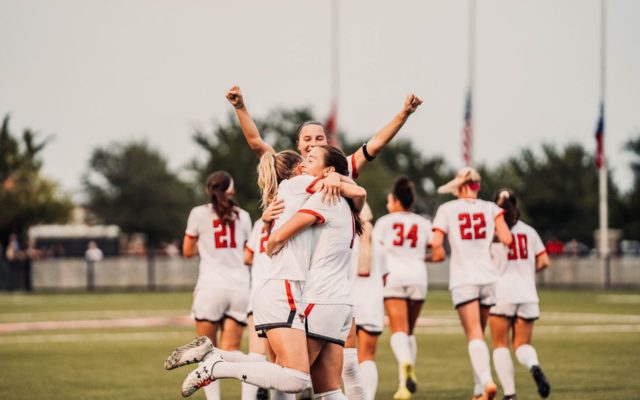 LUBBOCK, Texas – Hannah Anderson scored two goals and Kirsten Davis added another as Texas Tech earned its fourth straight win with a 3-0 result over UTSA on Sunday night at the Walker Soccer Complex.

The Red Raiders (5-0-1) completed a four-game home stand with victories over Hartford, Abilene Christian, Cal State Fullerton and UTSA with a 12-1 goal advantage and will now go on the road to play Arizona and Arizona State this week in Tucson, Arizona. Tech finished the win over the Roadrunners (4-2-0) with a 7-0 shots on goal advantage.

“I think every game has served up a bunch of difference challenges and hurdles,” Texas Tech coach Tom Stone said. “We knew coming in that we were going to play a physical team who are feisty. To be able to manage that and break the pressure at times with a variety of attacks was good. I liked the way we adjusted throughout the game.”

A junior from Plano, Anderson scored her first two goals of the season to take her career total to six after she had four as a freshman. Her first goal gave the Red Raiders a 1-0 lead in the 30th minute off an assist from Macy Blackburn and her second made it 3-0 in the 71st minute off an assist from Ashleigh Williams. Davis scored her fourth goal of the season in between the two from Anderson, giving the Red Raiders their second goal of the night and taking her career total to 35 with an assist going to Jen Rose.

Something about those corners tonight that @hannah8anderson is really digging! pic.twitter.com/ZPKTqgZAC5

The defense limited the Roadrunners (4-2-0) to only two total shots and no shots on goal. TTU goalkeeper Madison White earned the shutout win playing all 90 minutes without facing a shot. The defense was led again by Anderson and Cassie Hiatt who each played the entire game for the Red Raiders who have now recorded four shutouts through six games this season.

For the 4th time this season and 35th time in her career, @kirstendavis22 finds the back of the net! pic.twitter.com/TjcX4mNusa

Texas Tech will now play Arizona at 9 p.m. (CST) on Thursday at the Wildcat Invitational before playing Arizona State at 1 p.m. (CST) on Sunday in Tucson. The Red Raiders return home after the trip to host three straight games, starting on Sept. 19 against Eastern Washington before opening Big 12 play at The Walker against Oklahoma (Sept. 23) and Kansas State (Sept. 26).

Now in the match, for the first time since 2019, @pennymulenga! And she wastes no time in getting in the action pic.twitter.com/raN3nLnLjj