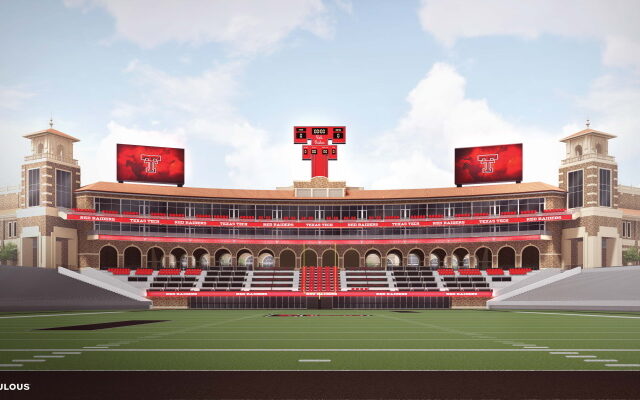 The project will be largely funded through private fundraising and annual athletics department revenue streams, primarily from the sale of new premium inventory. Pending approval from the Texas Tech University System Board of Regents at its upcoming meeting on Aug. 11-12, the project is slated for groundbreaking immediately following the 2022 football season in anticipation of opening prior to the 2024 campaign.

In order to be efficient with the timing of construction and to minimize the impact on both the football program and fans, the project, pending Board of Regents approval, will move forward while fundraising efforts continue.

“This is an historic day as we announce our intentions to construct what will be the premier football facility in the Big 12 Conference and nationally,” Director of Athletics Kirby Hocutt said. “This facility, when completed, will not take a backseat to any other school in the country. We have received tremendous interest from many of our supporters regarding this project and anticipate that continuing as we get closer to officially breaking ground.

“Our intent is to be the top athletics department in the country. As we look into the long-term future of college athletics, this project will set the stage for what we anticipate as decades of success on the gridiron for our Red Raiders. This will take all of us. There’s not a more passionate fan base in the country than Red Raider Nation, so we encourage all our alumni and supporters to contribute to this project and, as always, be a proud member of the Red Raider Club.”

The impact of this project will completely revitalize the south end zone of Jones AT&T Stadium, not only from a student-athlete amenities and development standpoint but by preserving one of Texas Tech’s most historic landmarks, the Double T scoreboard. Under the current plans, Texas Tech will debut a new Double T scoreboard atop a new four-story building that will enclose Jones AT&T Stadium.

The newly-constructed facilities will include over 300,000 combined square feet and blend world-class modern design and technology elements with Spanish architecture well known to Texas Tech supporters. 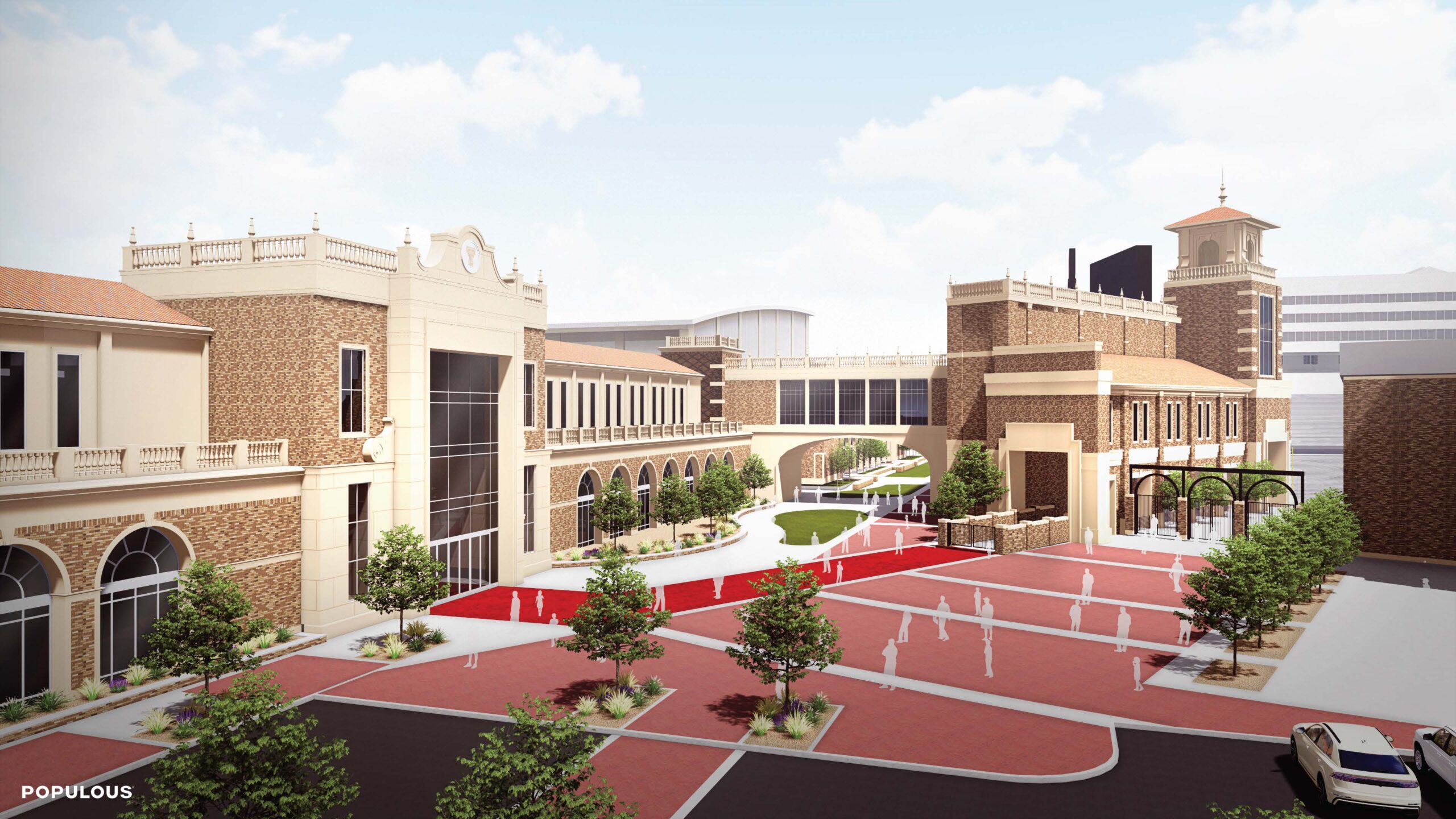 Fans will be able to enter the stadium through a new gate in the south end zone that will feature additional concession points of sale, an expanded concourse and ground level sight lines to Cody Campbell Field at Jones AT&T Stadium that will be unique to college football. The facility will have four floors with home and visiting locker rooms on field level accompanying a 7,200 square-foot club area that will welcome the Red Raiders onto the field each Saturday and give fans in this space one-of-a-kind interactions with the team.

The main concourse and loge boxes will occupy the second level, with coaches and staff offices on floor three and additional premium suite options on the top level. Texas Tech currently expects to generate significant revenue annually in premium seating once the south end zone project is completed. 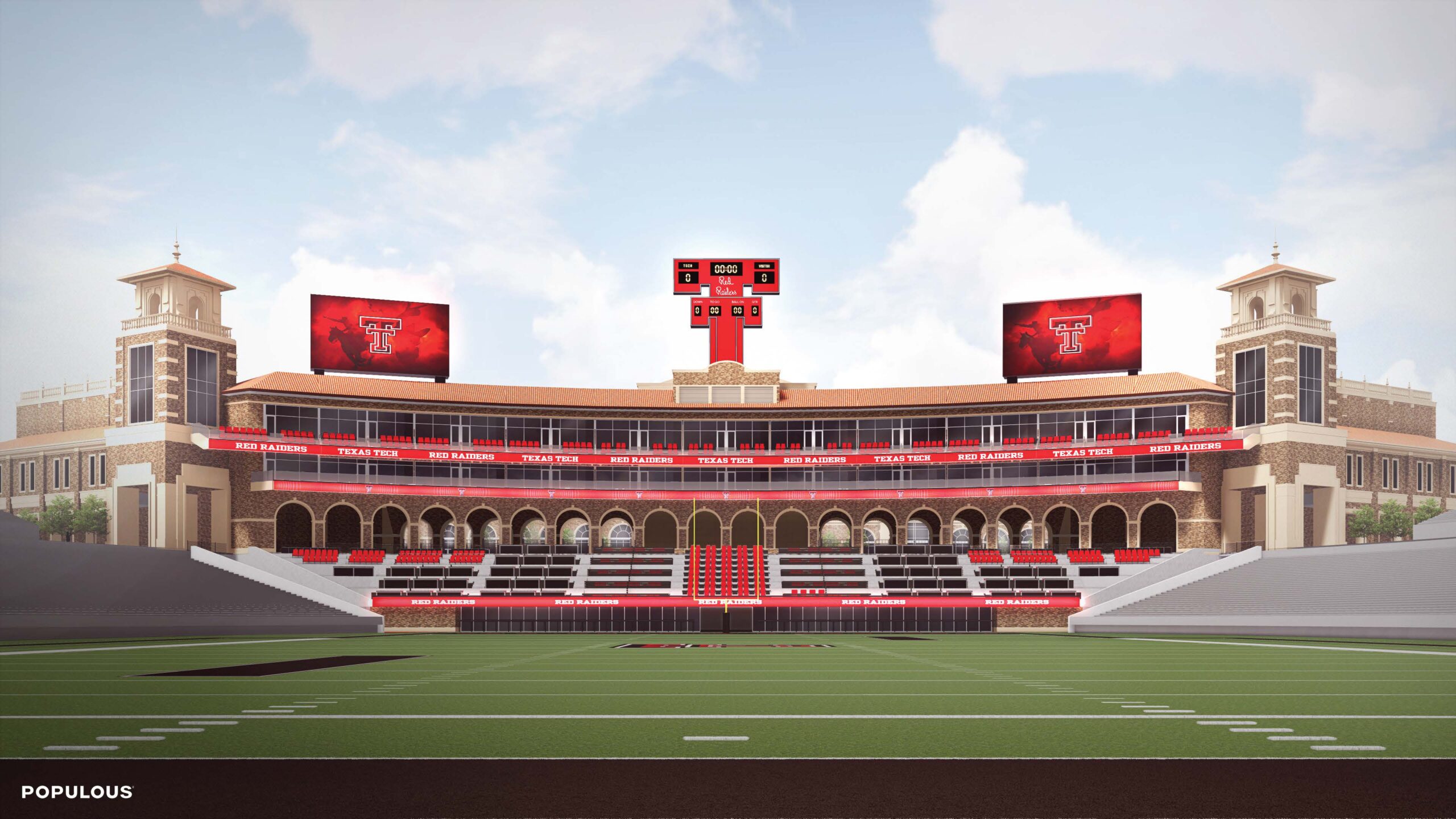 “The great universities in this country achieve excellence because of the commitment of extraordinary people who contribute financially and through their passion and leadership,” Texas Tech President Lawrence Schovanec said. “Without a doubt, this project will elevate Texas Tech and Lubbock and further affirm our football program’s positive momentum.”

Texas Tech will relocate its coaches’ offices to the third floor of the south end zone, which will overlook Cody Campbell Field at Jones AT&T Stadium and connect to both the Womble Football Center and the Sports Performance Center through a skybridge. Plans are for the Womble Football Center to be constructed on the same land that currently occupies the present Football Training Facility, featuring two stories in height as well as the expansion to Sixth Street to further increase the overall square footage of the facility. 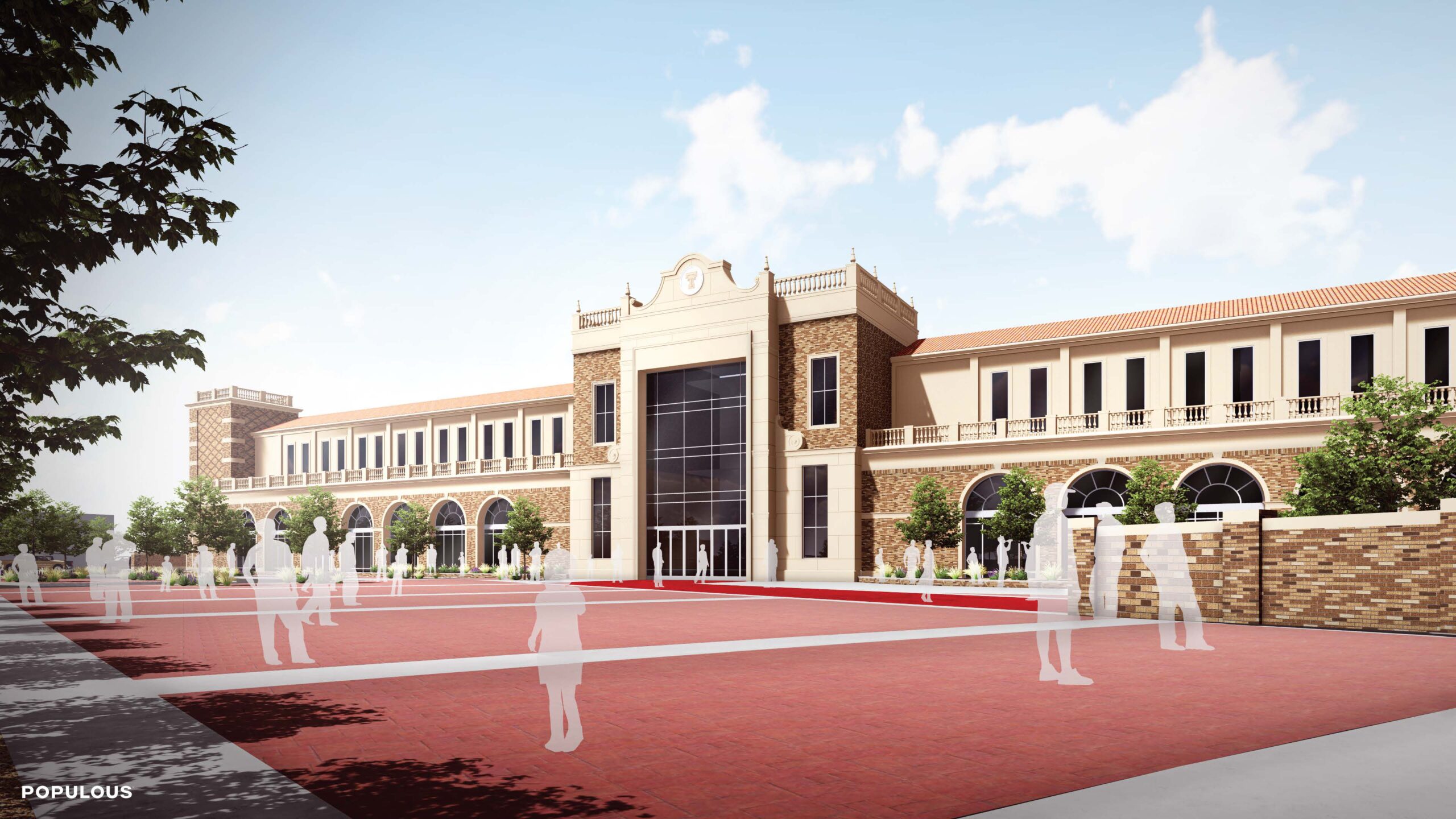 Texas Tech will maintain its football strength and conditioning, sports medicine and equipment areas on the main level of the Womble Football Center as part of the new layout. The second floor will connect to the skybridge, housing many of the football program’s meeting spaces, including individual position rooms and the Spike Dykes Team Meeting Room. This floor will also feature a revolutionary 6,000-plus square foot multi-purpose walkthrough area designed to allow for large-scale indoor team strategy implementation, instruction and technique evaluation.

Between the south end zone project and the Womble Football Center, the two facilities will contain space for both recruiting and players’ lounges, a new player locker room, a television studio for gameday and social media content as well as a significant investment into technology through digital signage and displays.

“We couldn’t be more excited for the future of our football program and what this facility will do in terms of player development and recruiting,” Head Coach Joey McGuire said. “The support for Texas Tech Football is real and it is passionate, and this project will position us at the top echelon of college football on a yearly basis. We are thankful for the support of so many of our donors who have already contributed and are planning to give to this facility.” 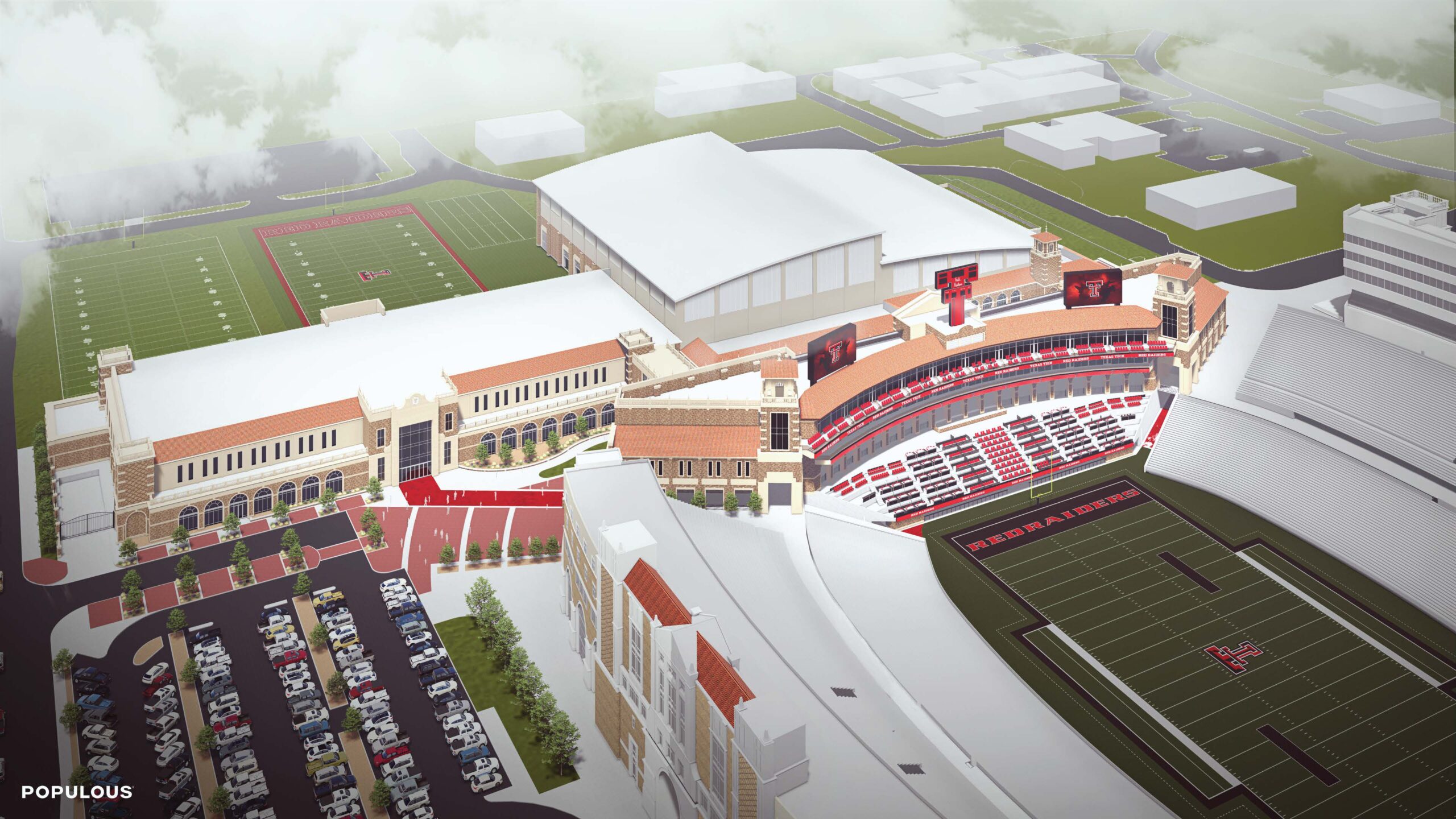 Over the past several months, the athletics department has utilized the services of Populous to redevelop its long-term plan for the south end zone and Football Training Facility projects. Populous, a global design firm based in Kansas City, was previously instrumental in the development of the Dustin R. Womble Basketball Center.

The project is being overseen by the Red Raider Facilities Foundation Inc. (RRFFI), which launched this past December as a separate 501(c)(3) established to provide new and innovative ways to deliver first-class athletic facilities. This investment will conclude The Campaign for Fearless Champions, which has impacted every sport program and hundreds of student-athletes for the past decade and for generations to come.

Alumni and supporters interested in contributing to the project can do so by visiting this link.

“This training facility project in conjunction with the south end zone represents the largest single capital project in Texas Tech Athletics history and will transform the facility, not only for our student-athletes, but for every fan who attends games in Jones AT&T Stadium. More significantly, this announcement demonstrates our unwavering support to ensure that Texas Tech currently is, and will remain, a significant player at the highest level of college athletics. Our alumni, our fans, our coaches and our student-athletes deserve the very best and today, we take one large step to insure we deliver just that.” – Dustin R. Womble, member of the Texas Tech University System Board of Regents.

“This project is a major statement from the Texas Tech community – from our university, our Board, our administration, our donors and our fans – that football is a high priority for us, and we intend to compete at the highest level. I am very excited about the future of our football program. With Coach McGuire at the helm, with the strong NIL program that we have in place, and now with facilities that will be among the best in the country, I firmly believe that all of the pieces are in place for Texas Tech to be perennially competitive in the Big 12 and nationally.” – Cody C. Campbell, member of the Texas Tech University System Board of Regents and football letterwinner.