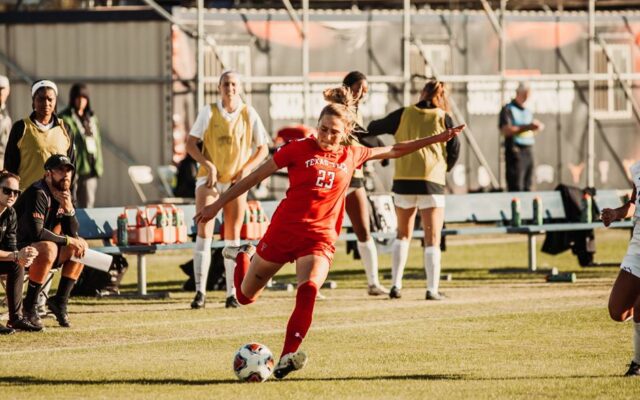 ROUND ROCK, Texas – The No. 5-seeded Texas Tech soccer team (11-6-3) fell in the semifinals of the Big 12 Tournament to No. 9 and top-seeded TCU, 3-0, Thursday evening at the Round Rock Multipurpose Complex.

Tech fell into an early hole to TCU (16-2-2) as the Horned Frogs tallied two goals in the first half. The first goal arrived in the 12th minute followed by the second goal in the 28th minute. Gisselle Kozarski had an attempt in the 36th minute but it went wide of the mark. The Red Raiders were able to win a corner kick in the final seconds of the half and nearly found the back of the net. Macy Blackburn served one into the box as Hannah Anderson’s header shot rattled off the post before the break.

Coming out of the intermission, the Red Raider offense began to find its rhythm, firing off five shots in the opening 10 minutes of action. One shot off the foot of Davis was saved while two more by Kozarski and Penelope Mulenga were blocked by the TCU backline inside the 18-yard box. It remained a 2-0 contest until TCU tallied its final goal of the night in the 80th minute. Texas Tech’s final shot was on frame, launched by the right foot of Davis in the 85th minute.

Despite being outshot, 14-10, Texas Tech won the shot battle in the second half, 7-6. Kozarski led the way in shots with three, while both of Davis’ shots were on goal. When it came to corner kicks, the Red Raiders registered six, compared to TCU’s two. Keeper Madison White secured two saves in the losing effort.