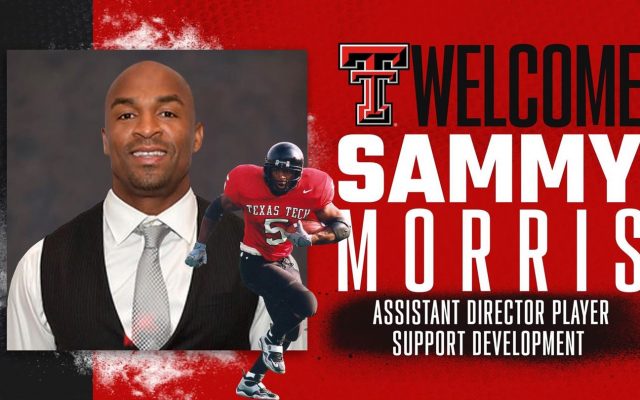 “It’s an honor to welcome back a Red Raider great to our staff,” Wells said. “Our student-athletes will greatly benefit from Sammy Morris, his experience and his presence in our program each and every day. He will be a tremendous resource for newcomers entering this program as well as to those whose careers have ended and are looking to continue their careers professionally.”

In his new role, Morris will serve as Texas Tech’s NFL liaison to scouts and team personnel, while also working as an advisor for freshman and transfer student-athletes entering the program. His most important role, however, will be as a life coach and advisor for more than 100 student-athletes in the football program based on his own experiences as a collegiate athlete and NFL standout.

“It’s special to return to Texas Tech in this role that allows me to tell my story and be a mentor to these players,” Morris said. “My goal is to do anything I can to help these players avoid the pitfalls I made and to grow into a man and an adult. It’s all the more special to do that at a place where I learned all those same lessons and grew into a man myself. My family and I are excited about this opportunity, and we can’t wait to get started.”

The job responsibilities outlined possibly couldn’t be a better fit for Morris, who has his own unique story that will relate to student-athletes. Once one of the top athletes to come out of the San Antonio area, Morris looked to be the future at running back for the Red Raiders as a freshman in 1996 before academic issues kept him off the field for the next three seasons.

Morris returned and was elected a team captain prior to his 1999 senior season where he had a memorable 170-yard performance against rival Texas A&M and eventually led the team with 948 all-purpose yards. His efforts were recognized following the season as he was tabbed the Pete Cawthon Memorial Team MVP and was honored with Donny Anderson Sportsmanship Award.

Morris’ redemption story earned him an opportunity at the next level a few months later when the Buffalo Bills selected him in the fifth round of the 2000 NFL Draft. The Bills were one of four stops for Morris during his 12-year NFL career as he played in Super Bowl XLII with the Patriots. He played for Buffalo from 2000-03 before stints with the Dolphins (2004-06), Patriots (2007-10) and the Cowboys (2011).

Following his playing career, Morris served as an assistant coach for Attleboro High School (Mass.) beginning in 2013 and then as an assistant strength and conditioning coach with the Patriots from 2016-18. He was hired in 2018 as the running backs coach at Dean College.

The son of an Air Force veteran, Morris earned his undergraduate degree at Texas Tech in communications studies in the fall of 1999. He and his wife, Leslie, are parents to three children, daughters, Kiera and Jadyn, as well as a son, Sammy. Kiera and Jadyn are currently students at Texas Tech, while Sammy is a senior at Prosper High School.